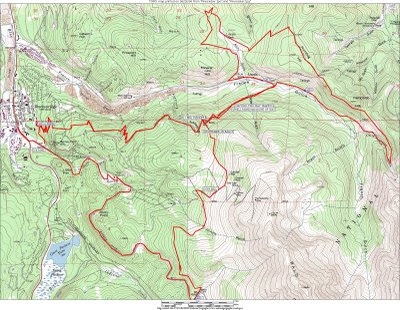 Okay, sports fans, so here is why I do what I do-- long days in the saddle, turning over mile after mile. At the prime age of 39.75 years my body is telling me go long. I prefer the marathon type mountain bike races to the classic XC. I can maintain a high heart rate for hours on end once I've ramped up to it and can push back many of the mental demons that can stop most riders after a couple of hours.
So my first big race, as profiled, is the USAC Marathon Nationals in Breckenridge Co called the Firecracker 50. It's a great race, for many reasons.
1. I get to race the same course as the Pros
2. I get to race in the peaks of Colorado
3. The race starts in the town of Breckenridge, CO and we are the start of the 4th of July parade, so as we roll out of town, we are supported by thousands of cheering fans. Kids put up their hands for high 5s. It's pretty sweet.
4. It's supported along the way with 4 aid stations with peeps handing up goos, water and gatorade.
5. Free food and beer following (but ya gotta get done early enough)
...the list goes on. It's such a great vibe and even though the town is a touristy ski town, it's gorgeous in the summer and the condos are cheap! You can find 1bed or studio for $75 a night within walking distance of Main Street. Park your car when you arrive and not again until you head home. It's pretty sweet like that.
So, back to my race prep. I'm concerned. I haven't had the XC season I'm used to having by now. I've usually done 5-7 XC races come July but I've only done 3. THREE! And my training is different. Lots of long hours to build up that endurance but not consistently at high heart rates. The great thing though is my bike is made for this type of racing. 4" in front and rear give me what I need to make the decents faster and my climbing more efficient (with pro pedal). If I can channel how I felt in the Rocky Mountains State Cup race in April, I should be fine, however, that was an XC event at 4,000 feet. The Firecracker 50 is a fifty miler at 9,000 and up. But, I've done this three times now. I know what I'm in for so that's good. I placed 4th in my age division last year. My hope is to get on the podium this year. That means I need to shave off 30 minutes from my time. That's a ton of time. I'm contemplating going with just one bottle and filling up at the aid stations instead of using my camel back. Ryan's done it that way before. I just fear I won't drink enough. We'll see.
Ryan, Larry "Hot Pepper Harlan" Kitner and I will head out 7/2 in the 'ru. There's nothing like summer time in the mountains. There's no place I'd rather be.
Posted by Roxy at 10:53 PM