When It Rains, We Hit the Road

So last Saturday coulda been a bust. Friday night, while we were sitting at a table enjoying a meal and some good company we got the call from the race host that we were going to have to cancel the race because there weren't any routes to get to the golden single track. We apologetically got up from our chairs and literally ran out the door to get home and get things shut down and the word out. It was chaotic, to say the least. But, amidst the chaos, RF had a moment of clarity. "There's that race in St. Joe", he said as we sped home. This is why I married this person. Between phone calls to our registration admin and more from frantic racers trying to register, we were planning our escape. Multi-tasking at its finest. Once all the craziness settled, the fun mobile got packed and we hit the hay. We were up the next morning, bright and early. Suddenly and all at the same time both our phones and computer were buzzing. Somebody was trying to tell us something. It was Martin. He wanted to come along. Sweet. Blast off was in 45 minutes. As I was loading bikes, I discovered RF's tire was flat as a pancake. The new tires were not holding air. Ryan disappeared into the garage and reappeared with two new rims and tires. When there's a will... By 7:45 we were on the road. We pulled into Crane to see if anyone wanted to tag along but sadly, nobody wanted to play with us. We got our caffeine on and were off like a prom dress. We took all of 10 minutes to pick up our partner in crime and then it was off to the races, so they say.

And what a grand day. By 10:30 we pulled into the race venu. It was sunny and brisk. The breeze we had at home had followed us to Missouri. Krugg Park is pretty cool. I raced there ions ago but this trail was all new. I'd suggest it as a travel destination. They have stuff for the whole family to do and Martin said this park connects to two others via a bike path. Nice!  At the top of the park is a really sweet trials area made of large boulders that look like they came from Colorado. They were packed with kids on trials bikes and bmx bikes. Then, come to find out, there was a trials contest and the trial bike club also sponsored the food for the XC event so we had hot chow post show down. Missouri peeps rock.

The race was on a brand new 7 mile course. Aside from the grueling open road climb from the very bottom of the park and a tiny bit of riding through an open grass area past the scoring table, the rest of the race was in the trees; loop upon loop of tight single track goodness. It was just like home with lots of power riding. Up and down and around and around. We crossed several wood bridges that were only feet off the ground. Seemed they had had some rain up to race day but their trails were so groomed, only the creeks under the bridges showed any sign of standing water. The trails were pure IMBA standards to a T and it was a pleasure to ride such well built trails. They were tacky and rooty and much to my surprise, no rocks. Very rare in that state.

At noon we lined up at the bottom. The promoter was new and treated it all very casual. Ready set go, pretty much. All Cat. 1 men and women went off at the same time. I managed to grab a few spots before the hole shot but paid dearly. For 45 minutes I was pegged but it was my doing. I pulled a group of 3-4 dudes the whole way. I waited for one of them to ask to pass, but it never came and I was red lined the whole time. But since there weren't many women there to race against, I raced the guys instead.

Lap two was much more mellow. We put our feed zone in the trees a bit, away from the start/finish area. We had asked about a feed zone location and an official about blew a stack sighting the race wasn't long enough for a feed zone, yadayada... Well, technically we weren't asking for a feed zone but really just a place to put our cooler. Unfortunately, they don't list that in the USAC handbook, so not wanting to cause a ruckus we put it in the trees. So, most of the pain train I was conducting stopped along the start finish to refuel and I went along to my stop. They came up the trail not long after I stopped. One guy kept going, but the next two let me jump in. Very cool of them. But this lap was much more mellow. I didn't try too hard to catch the first guy and nobody asked me to get a move on, so I kept it at a moderate pace. I eventually dropped the two guys and then on my 3rd and final lap I turned on the burners. Most of the time I burn myself up early and then moderately ride the last lap. I had some more gas this time because I chilled out the 2nd lap. Plus, it was so freakin fun to ride! Helluva good time. I think I got passed by one SS guy, who upon passing, gave me a compliment. Right on. :) By then the trail was mostly empty so it was me and the trees. Just how I like it.

At 2:15 I finished and waited for Ryan to come out from his 4th lap. After standing there, I noticed he was in street clothes. I thought, uh-oh. But he only had to do 3 laps. Martin thought he had to do four and that Cat. 2s had to do three. Well is was three and two, so MB ended up doing an extra lap. He was bummed but also elated that he did it. The trails were so fun to ride, I'd have to say he didn't mind, although he probably would've went harder knowing he had to do just two laps. So, RF ended up 2nd to some local stud in his age group and 4th over all Cat. 1. I got first and Martin managed to stay in the top 50%! Woohoo! Also Nebraska stud Jay Chesterman got 3rd behind Ryan. All in all, it was a great way to make the best of a bad situation and now we know about a great place to come and ride! 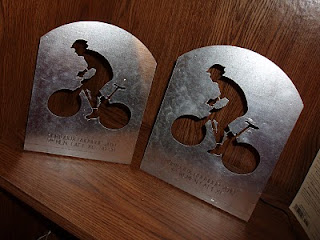 But the fun didn't stop there. We made it home by 6:30 after stopping for another meal and then dropping off Martin at home. That happened to be the same time some of our peeps were meeting at Josh Stamper's place in Waterloo to BBQ. But luckily the cancellation of the race didn't mean the BBQ was off. That's the beautiful thing about bikers. We like food too much. So, without even showering, we changed into something less smelly, threw on some cologne and were off again. (Our neighbors surely think we're nuts). We pulled up at the Stamper's awesome 90 year old farm house where the Cooke's and the soon to be Dolotos were chillin with the Stampers. Josh was manning the bobs on the grill. Inside were loaves of home made bread sticks for dipping and all kinds of goodness. I quickly made waste of my wine bottle cork and before I knew it I was one glass down before I went back outside. The rest of the night was spent killing that bottle of chardonay and listening to stories. Chris Wolff and his new little bit of heaven arrived well after dark but well before I called out a s'mores run. Ryan and Jeremy were all over that and came back with all the fixins. It was time to get our s'moregasms on. What is that, you say? Put peanut butter on your s'more and you'll be howling at the moon, guaranteed!

What a day! Road tripping, bike racing, s'mores...now that my friends, is how you kill a Saturday.
Posted by Roxy at 12:32 AM
Labels: krugg