Back in the Saddle

As Aerosmith once said....

Last weekend was my first race since last July. It was more than just a race. It was a reaffirmation that I truly am all about dirt trail racing. Last weekend was officially the beginning of my race season. And although I will be ramping up all spring and each race will be training, I don't really care. I'm riding my bike, on single track, away from cars, cement, gravel and most importantly, wind.

Bone Bender was held at Clinton Lake, a course near Lawrence, KS., where smooth trail is the exception. Rock garden didn't apply there. The trails are a test of suspension, tire pressure and nerves. Luckily, we didn't have to deal with them being wet too. I've raced there before and knew that the flow of the course allowed for power riding over the rocks. A few spots tripped me up every time but for the most part, it was all doable. 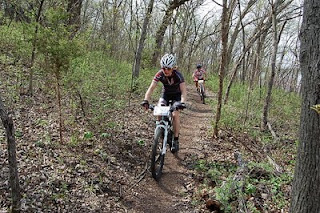 The race started with a run up a very steep and rocky service road. I welcomed it this time. With all of the off-season running I did over the winter, I wasn't intimidated. The only thing that sucked was my bike was at the end the rows of bikes, so I had the farthest to run. The gun went off and up the road we went. Once at the top, I felt like frogger, trying to get from the road to my bike all the while dodging mounted and as well as penguin-trodding racers. Once on bike, I threw it in the big ring and tried to make up as many spots as I could. All came to a grinding halt once we hit the single track. The rocks stacked us up like a bunch of nervous hound dogs. I knew I could climb so I just pedaled slow enough to give myself the room to power up. As the race went on the faster riders were allowed to pass and soon I was with a handful of guys who liked to hammer. After lap 1 I was in 2nd.

Lap two was much better. I could breath. There was room to hammer and also make mistakes without holding up anyone else. I did hit the ground on one root-rock combo that I mis-dialed. As I came through the s/f I noticed many of my team mates on the sidelines. The rocks had won a couple battles.

At the start of lap 3 a woman came through in my cat. She was pretty quick. I jumped on her wheel as we pushed towards the trees. She had great handling skills and didn't slow down much except for some of the rockier power climbs. I think she was on a hard tale and got bounced around a lot. I gave her the room and decided I'd just kinda "be the hunter" and let her hang out there in front, but in sight. Whenever it smoothed out she was like a jack rabbit but once the trail got rocky or went up, I could usually real her right back. I gave her room on the power climbs so that I wouldn't have to clip out but on the final one, after she clipped out and pulled her bike over, I gave her props for some great riding and continued on. She didn't chase so finishing my third lap, I kept my 2nd place position.

Just as I came through the s/f, I saw another woman just leaving. She seemed tired and not very interested in going again. I assumed she was on a team or something but it turned out she was the leader. I had come in at around 2:54 so I could have gone back out but toward the end of the lap, I had resolved myself to the fact that I had had a great race and since I was going to be traveling and racing for many weekends to come, I didn't want to push myself right out of the gate. So, yes, I quit. But in my mind, I had accomplished everything I wanted to and going into a 4th lap tired would have only increased my chances of making mistakes. I played it safe. I still managed to get on the podium, which was super cool.

I'm super bummed that so many tires of my teammates succumbed to the rocks! It was a test of tires and tire pressure for sure. On the other hand I'm super excited for newbies Todd Wixen and Kevin Bretetic who podiumed in the Sport open cat after only racing a few years. There were 50 dudes in that cat and they got 1st and 2nd. How f-bombing cool is that. And of course I gotta give props to Mr. RF for his amazing performance, especially after a week of traveling and checking things off the honey-do list!

Thanks to everyone for your support over the last 7 months while I healed and dragged myself from couch to saddle. As we all know, that damn couch has a loud voice. It's been pretty tough getting back mentally. The damn weather hasn't helped but I'm looking forward to getting back in shape and racing. Next up Pueblo, Co. and Fruita.
Posted by Roxy at 2:41 PM
Labels: bone bender race