I Got Down & Dirty in Warsaw, Missouri 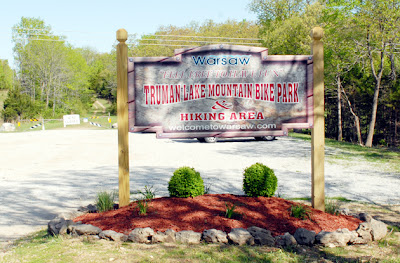 In my last post, I posed the question;  What makes a mountain bike race great? A little race down in Warsaw, Missouri, The Down n Dirty, part of the United in Dirt series, did everything it could to make it great. And though Mother Nature tried to kill the dirty south vibe, the promoters and racers just weren't gonna let her get her way.

Another rainy weekend was on tap for the midwest but the Down N Dirty was on our schedule for the weekend. Rain chances were likely, but not 100%, unlike here, where, well, most of you know, was downright misery. We packed the van in the pouring rain. The plan was to hit Swope Park on the way down to test out some changes to the Remedy and then head down to Warsaw. Swope was velcro and we didn't want to leave. After driving through rural Missouri on swervy 2-lane highways, through numerous small towns, eating dinner in the van, we made it down to Truman Lake Mountain Bike Park around 9pm, in hopes of camping in the parking lot.


We weren't the only ones with the same idea. There were a handful of racers who were sharing a camp fire and talking shop. One was a man from Kansas who knew me from other races. Said we were FB friends. Ah, the world is small. He chatted us up for a bit and we were invited to hang out around the fire. Once we got our van/sleeping arrangements situated we accepted the invite. We met a group of friends from the greater KC area, many who have ridden and raced many of the places we've been, so the talk wasn't just about whatever ring this and whatever tire that. We actually had a two-way conversation about stuff that I knew about. Huzzah! It was a gorgeous evening and we went to bed under a starry sky in the parking lot, even though camping wasn't allowed. The ranger was racing the next day, so he was fine with the whole situation. Score one for bike community.

Sleep wasn't too bad, once we rolled down the windows to get some air flow going. But as the day began to break, so did the rain. Our race didn't start until 11 so we didn't feel the need to get up. We heard the promoter arrive but he didn't get out of his truck, so we followed suite. But by around 8:00 am, he was out of his truck and pulling out the tents and tables. The race was on! But I wasn't sure I wanted to do it. It was still raining and had been since about 6a.m.

Soon our new friends were up and about, gathering under the picnic shelter, making breakfast and chatting. Ryan finally got up to check out the scene. Race was on and everyone said the trail could handle the rain just fine. The trails in the Ozarks are for sure rocky but that didn't help my mind. Wet rocks sounded worse than mud. What to do, what to do.

Slowly, people started trickling in. I finally got out of the van and though it had been raining, it wasn't really cold and we were somewhat protected by the gale force wind that sucked our gas mileage to a crawl on the way down. I couldn't decide. The only thing I could decide on was that I needed some coffee so I could think. I boiled up some water and made a couple of instant cups of Tasters Choice or some crap that we got at Walgreens in Clinton, MO (they were out of Starbucks Via). People kept coming, even though it was probably raining where they came from.

Finally, at 9:30 am, the rain stopped. Slices of blue sky could be seen to the west. My mood changed from this is BS to OK, let's give it a try. Ryan was wanting to tear some legs off and we came all this way, so what the hell. We paid our $35, got the Tshirt. (Tech shirts seem to be very popular this year. This was my 3rd one this season).

Only an hour to prepare switched me into focus mode. When camping, everything is everywhere and not where it should be. On top of that, we hadn't eaten much so I boiled up some water for oatmeal. Ryan ate a pre-boiled sweet potato and boiled eggs. There wasn't a water source at the site. Luckily we brought some with but he still had to beg some off people. Finally, we were all ready to go. We hit the paved road for some warm ups and lined up. It was sunny and actually kinda hot and humid. My lenses wouldn't stay clean. We signed up for marathon just to get in the extra ride time. I was the only female but I didn't care. I just wanted to get in a good work out and stay outta harm's way.

Before any of us took to the start line, the playing of the national anthem was in order. But this wasn't going to be any BS pre-recording. We were in the Dirty South. It was played by a guy on his electric guitar, who channeled Jimi Hendrix like his life depended on it. It was pretty f-ing spectacular. (Ryan said he played off and on during the races too).

We lined up after the first timers and juniors were off the course. It was me and about a dozen or so dudes and one junior. I was quickly shot off the back as we paraded around the starting field. It was bumpy and wet and full of rocks and sometimes broken glass. Within seconds, we were on the service road that lead to the single track. 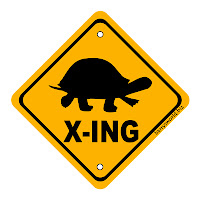 In all of my years racing, I've never had to do a turtle call-out. As I was charging up the gravel track, I noticed one of the "rocks" was moving. I swerved to the left and pointed down. As we entered the single track, the guy behind me thanked me. He would have run it over. The single track was at first gravel and under water. The corners were greasy. The roots were small but still kept me weary. The rocks were slick but somehow, not exactly throwing me off the bike. Unlike Syllamo or Clinton Lake, the track wasn't really up down. It was more turny so sliding around a relatively flat rocky track wasn't as disconcerting. I let a few guys go by b/c I was riding like a scared child. The race didn't mean anything other than my pursuit of staying fit for bigger races, so I wasn't going to risk injury. The track actually wasn't too bad as we got higher in elevation. It was actually hooking up and not packing up due to the graveling consistency of the dirt. But the conditions still didn't allow anyone to take the course for granted. Just when I found a flow and thought I was in the clear, I was met with a rut, a root, or a rock. Sometimes, all three! There were probably a dozen water crossings along the 7.5 mile course and each one made the bike talk back to me, reminding me this wasn't a good idea.

One lap in I was covered in mud. I couldn't see very well but still managed a 45 min lap. Bike was intact and when I popped out of the trees I got a large round of applause and someone even called out my name. It gave me wings. I swapped bottles, grabbed a stinger waffle and headed back in. I was 15 min ahead of the Cat1/2 race start so my goal was to hold off the leaders as long as possible.

The track was improving in sections. The sun was out consistently so that helped but it also hurt. The shadows being cast across the trail hid the details so scanning ahead was very difficult. Add on top the fogged up and muddy lenses. Good times. Towards the middle of the lap I looked up and saw Ryan walking. What? I get up to him and then I see another marathon racer walking. Uh-oh. Seems they both flatted on a g-out water crossing and neither could get the tire to reseal. Ryan didn't want to race on a tube with high pressure on this sketchy course, so he ended up with a DNF. Same with the other guy. So Ryan became my pit man and made sure I had what I needed each time I came through.

The rest of the race was pretty uneventful. I got caught by the Cat 1 leaders within 45 minutes of their starts and then by the Cat 2 leader on my 3rd lap. My back was tightening up some because I couldn't really stand and pedal as there wasn't much trail where one could coast. It was like our trails, twisty and tight but with enough rock to keep ya on your toes. I took an extra second or two to stretch before I went back out for my final lap. Some of the trail got better and some of it got worse. It all depended on where the sun was hitting and where water was draining. Some sections that had no sun were like pinball allies, but I made it out.

The promoter was right. We definitely got dirty. 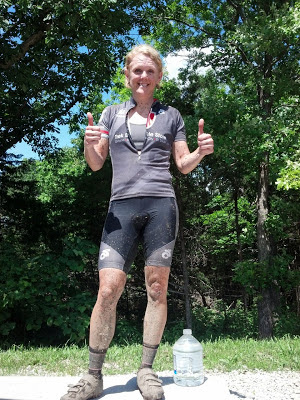 Post race was all about getting the mud off me and food in me and the folks running the event made sure that all happened quickly. This little race really has a great community around it. The parking lot is at the end of a dead-end road through a rural neighborhood. One of those neighbors supported the event by pulling their hose as close to the lot as possible to wash bikes. Another hauled a charcoal grill down to the shelter. Owners from the local watering hole, The Dam Bar, made sure there were big, greasy hamburgers and cold beverages for sale for the racers and fans, (which went down with a smile from me and the drunk grill master).

Yep, them Warsaw folks had all the basic details totally dialed plus a few dirty details to make is special for those who came a long way to be there. But I have to take my hat off to the promoter. He was excited and happy to be there the entire day, despite the dreary start and low turn out. The sun was out and his friends were on bikes, in the woods, having a helluva dirty good time.
Posted by Roxy at 5:54 PM