July 4th and the Keystone Warm Up

With our enduro racing season beginning next weekend in Keystone, Ryan and I took advantage of a long holiday weekend to get a look at the tracks at Keystone Resort. It just so happened that many local friends were racing in the Firecracker 50 in Breckinridge the next day, just up the road from Frisco, where were camping with Larry Kintner and his family. After a much delayed drive up the mountain due to holiday travelers, we spent the first evening just enjoying the lake's beauty in all directions. 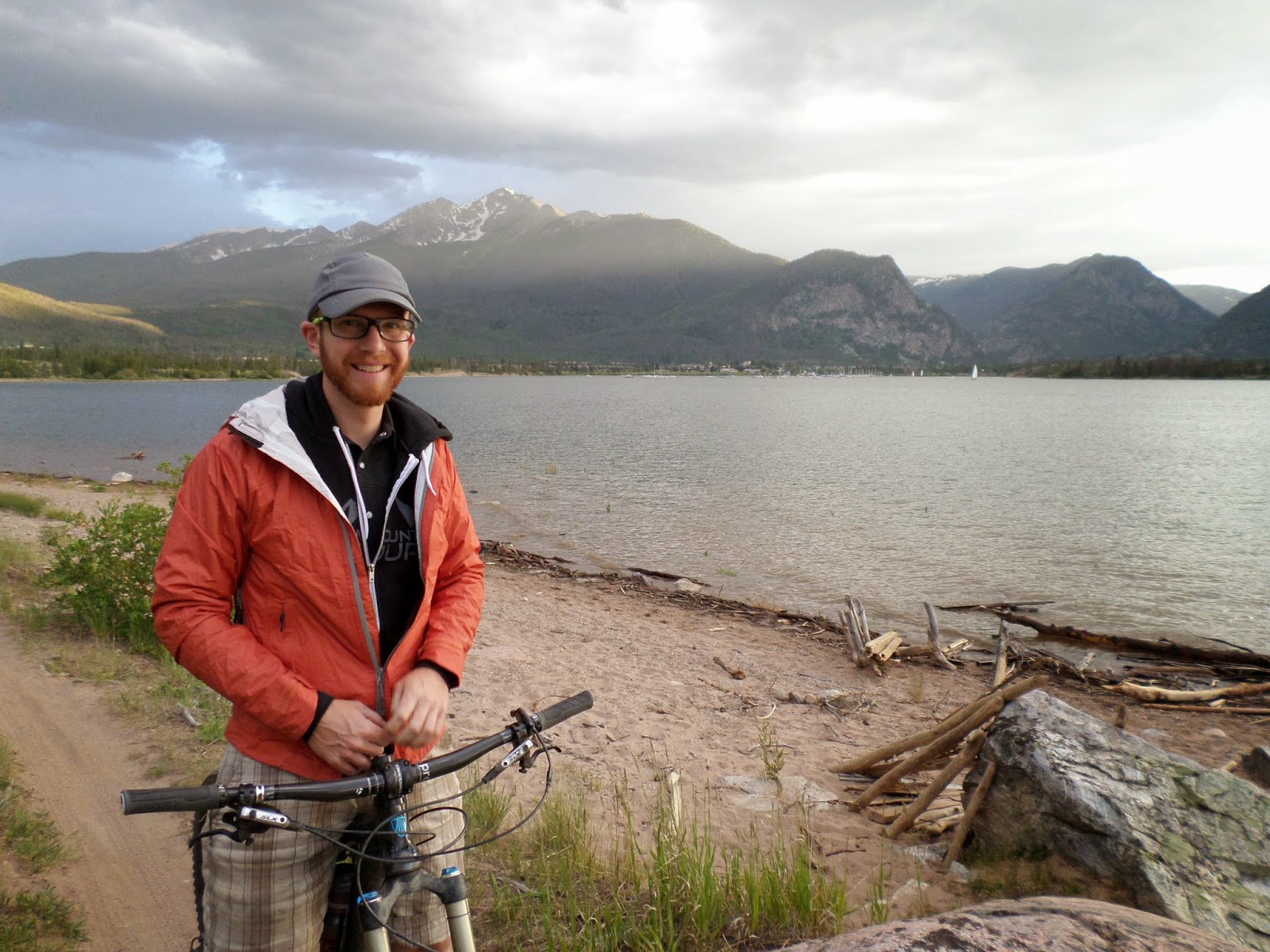 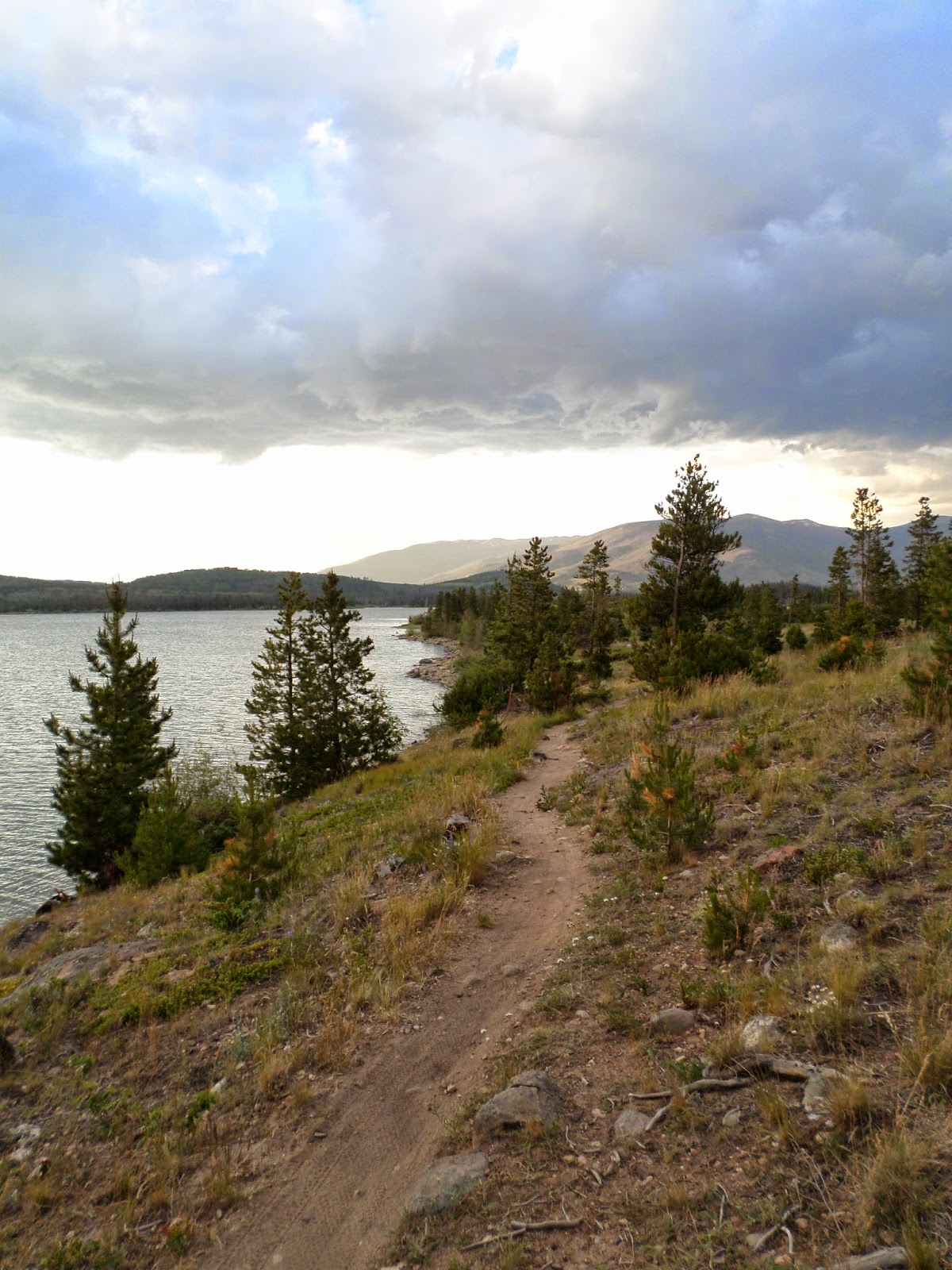 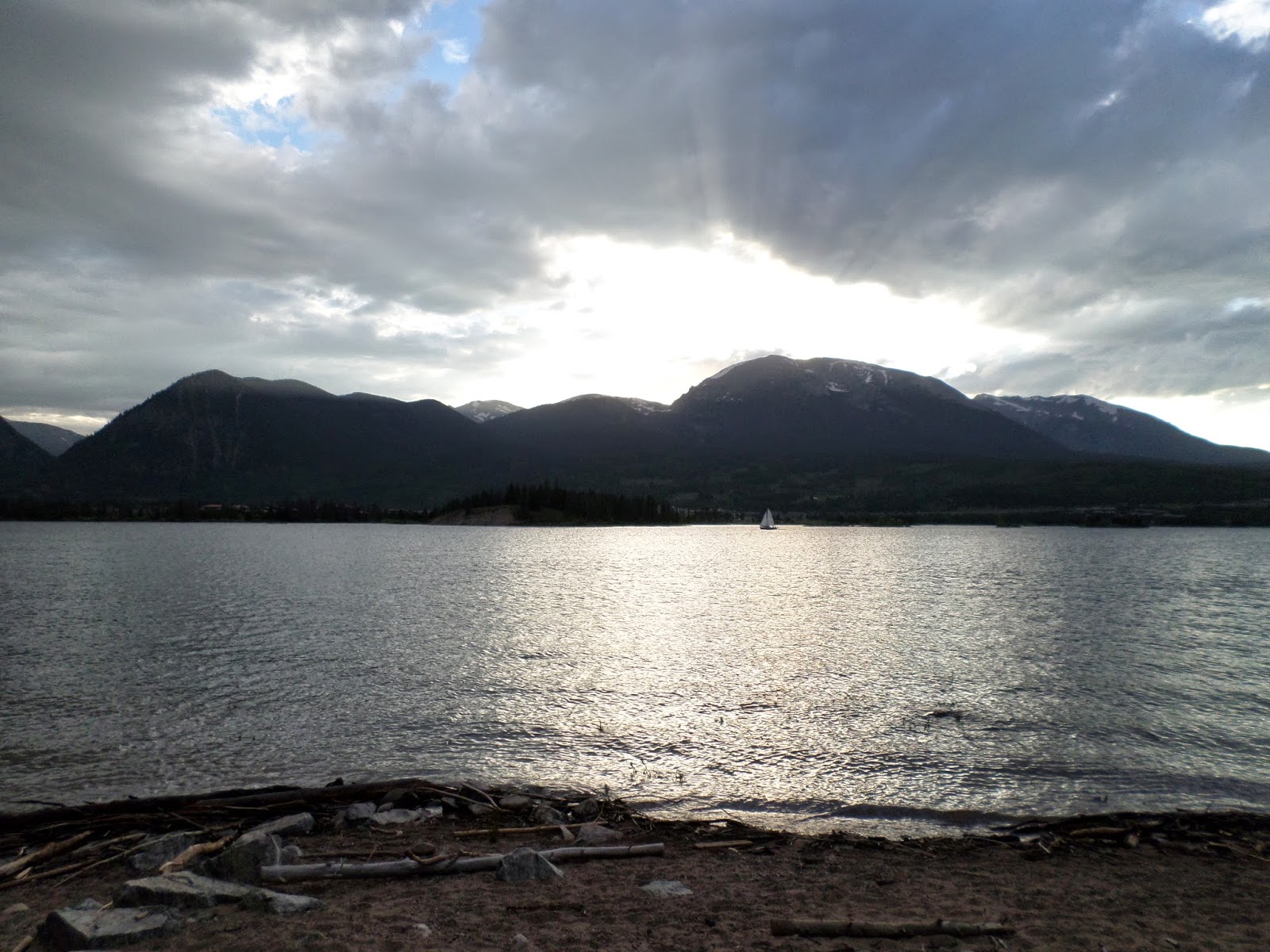 We decided to make the next day epic. Everything on bikes. Van was parked for the day so we packed up our c-backs and headed for the hills. Larry, Rafal and soon to find out, friends from Missouri and Omaha were racing the Firecracker 50, a race Ryan and I usually take part in. But this year with the Enduro coming up, we decided to be cheerleaders instead.

We left Frisco around 8:15, taking the popular Peaks Trail. Not far into the ride, I spotted a very large and hungry moose. My first reaction was to make sure there weren't any baby moose nearby. Well actually that was my second reaction. The first one involved soiling my shorts, cuz that thing was big and two bounds from us. It could have taken us out in seconds if it wanted to. As soon as some more bikers came along, it moved on up the trail and eventually out of site. 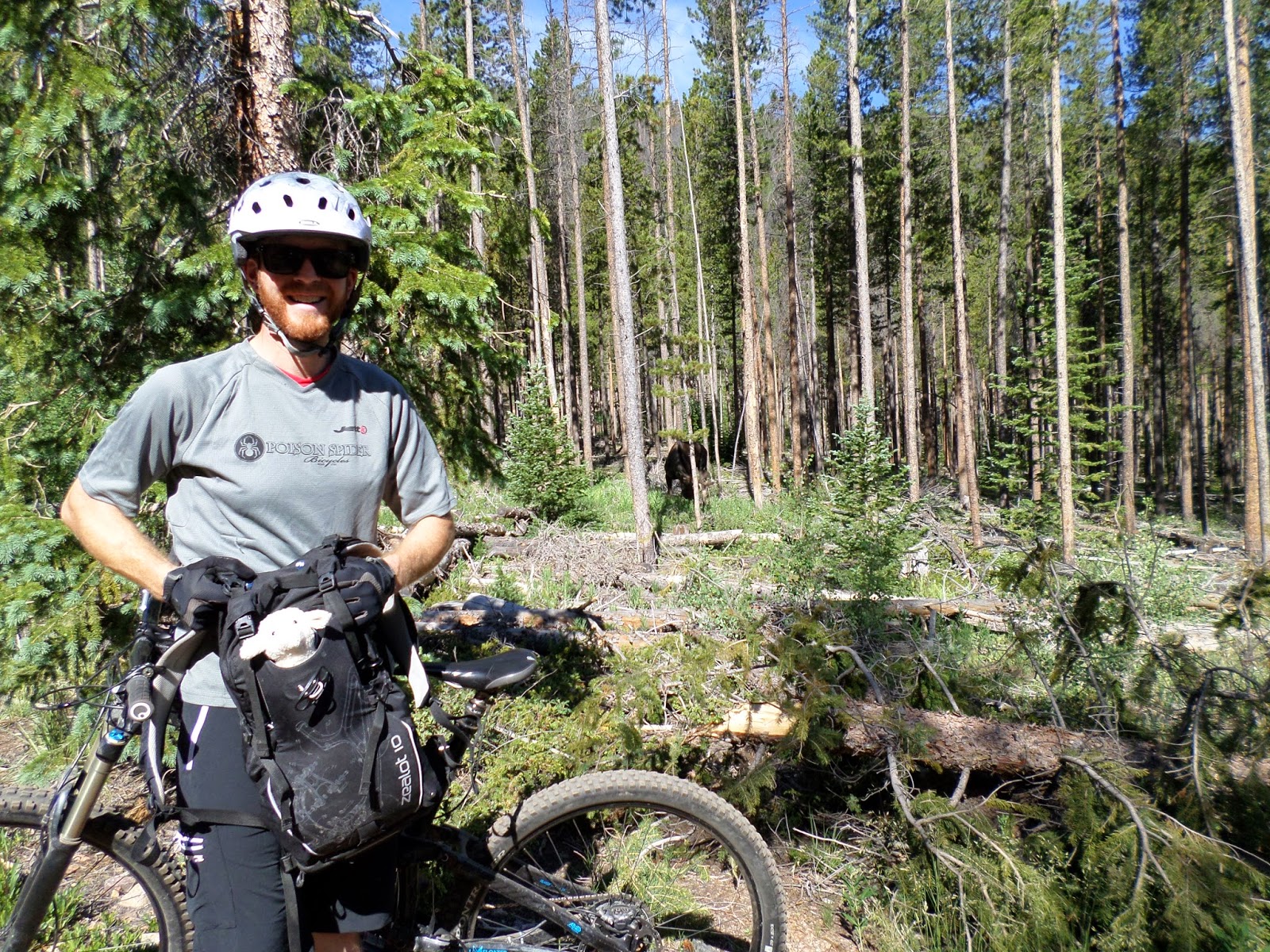 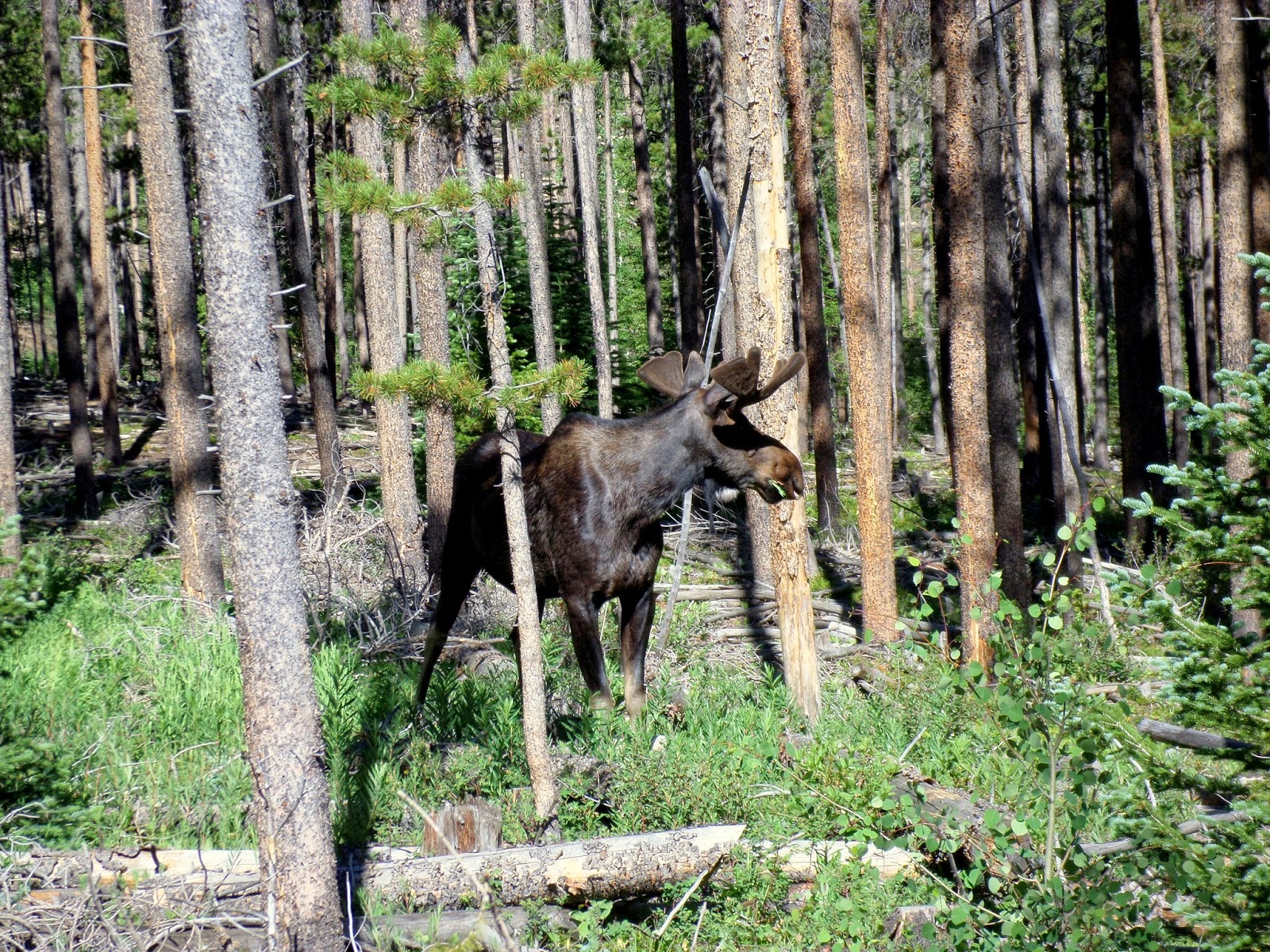 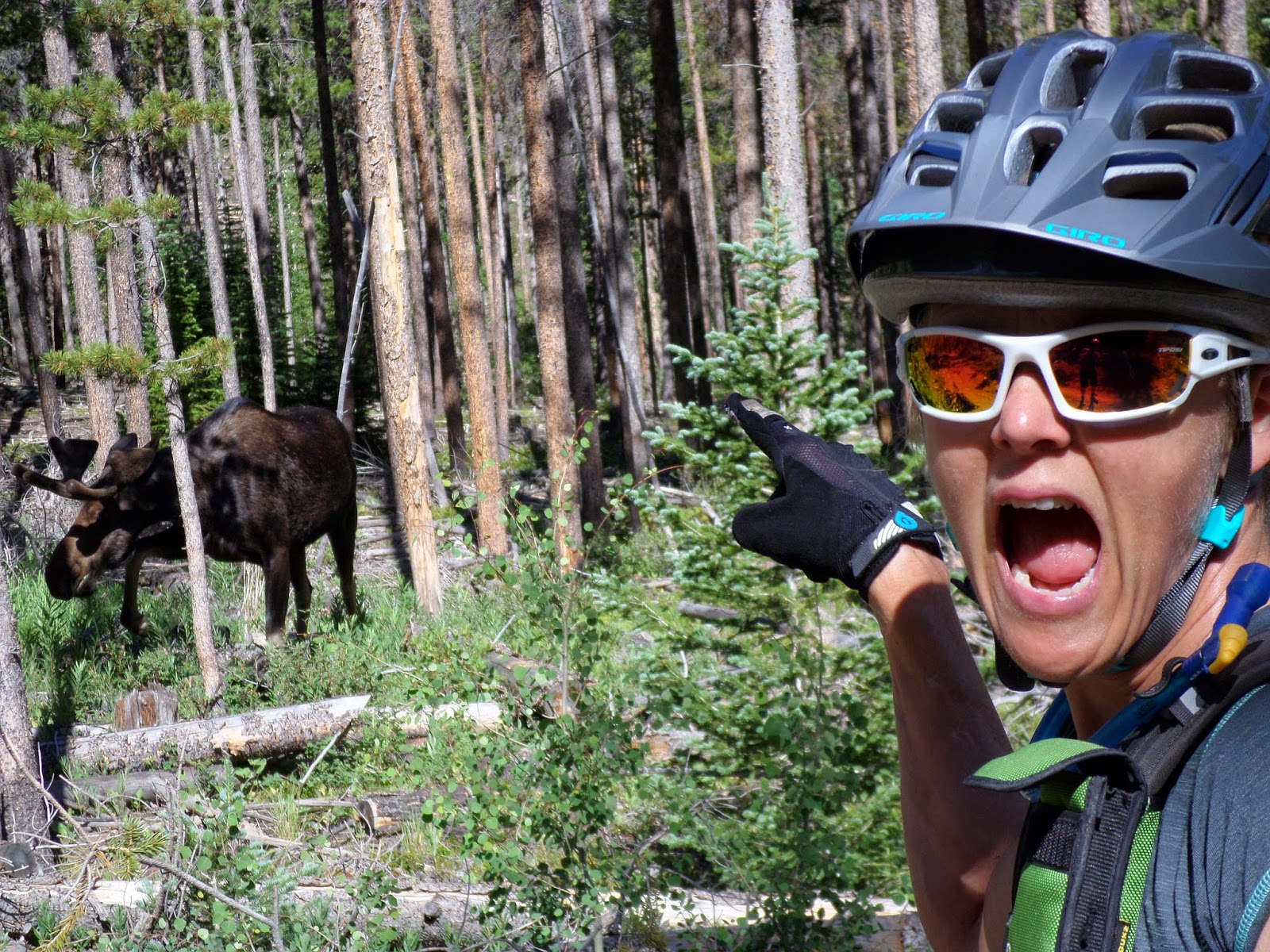 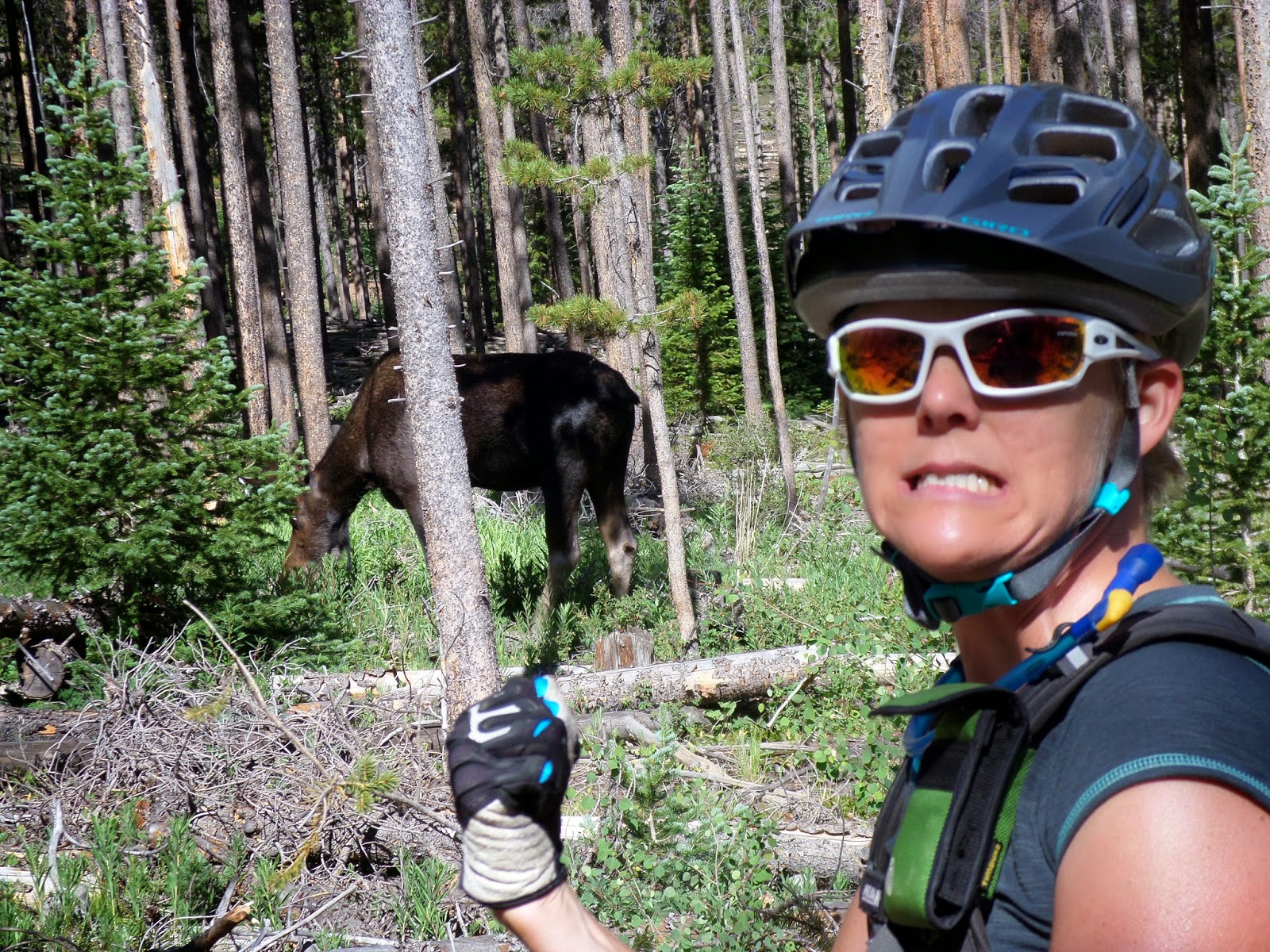 That was such an awesome thing to see! And to think, had we raced, we woulda missed it.

We got to Breck just as the parade was ending and people were everywhere. We walked our bikes across Main St and up to a little vegan cafe that was local stash awesome. We got some cold coffee to go and headed over to the race venue where we thought we'd arrive in time to see everyone come through. We found our friends and also that's when we saw our racing friends from Missouri. It was great to see so many local faces at such a far away race.


After seeing Rafal and Larry come through, Ryan wanted to see if we could catch them again on the course so he nerded out on some maps and we took off up the paved roads of the Wellington Neighborhood, high above the town. We found some really screaming singletrack that we had not been on before (Barney Ford) and actually got to the last climb before the racers would descend to the finish. We were kinda bummed not racing until we started seeing some of the suffering faces of the racers coming up the climb. We had a blast cheering them on. "Beer is Near" was my mantra and that seemed to brighten up some of the racers. Ryan was yelling all sorts of encouragement. We saw our coach looking strong, not far off the lead pro woman. His face was hilarious because he did not expect to see us at that point on the course. We were up there for about 30 minutes or so when Ryan saw Rafal and started yelling at people behind him that they were getting beat by a guy from Nebraska! Ryan pushed him up a few pedal strokes, but he was looking strong and finished under five hours, which is a great time at altitude. Maybe 25-30 minutes later, here comes Larry and again Ryan tried to give him a push but he was in a train so it didn't really work but he looked good at that point. Not long after Larry went by, we waited for a break in the action and took off down the course, always looking back to make sure we weren't in the way of any racers. The top of the course before you hit the switchbacks at Carter Park have been bermed and it's like a skills park up there. They must have put them in last summer and it was a riot. Ryan hooted and hollered the whole way down. 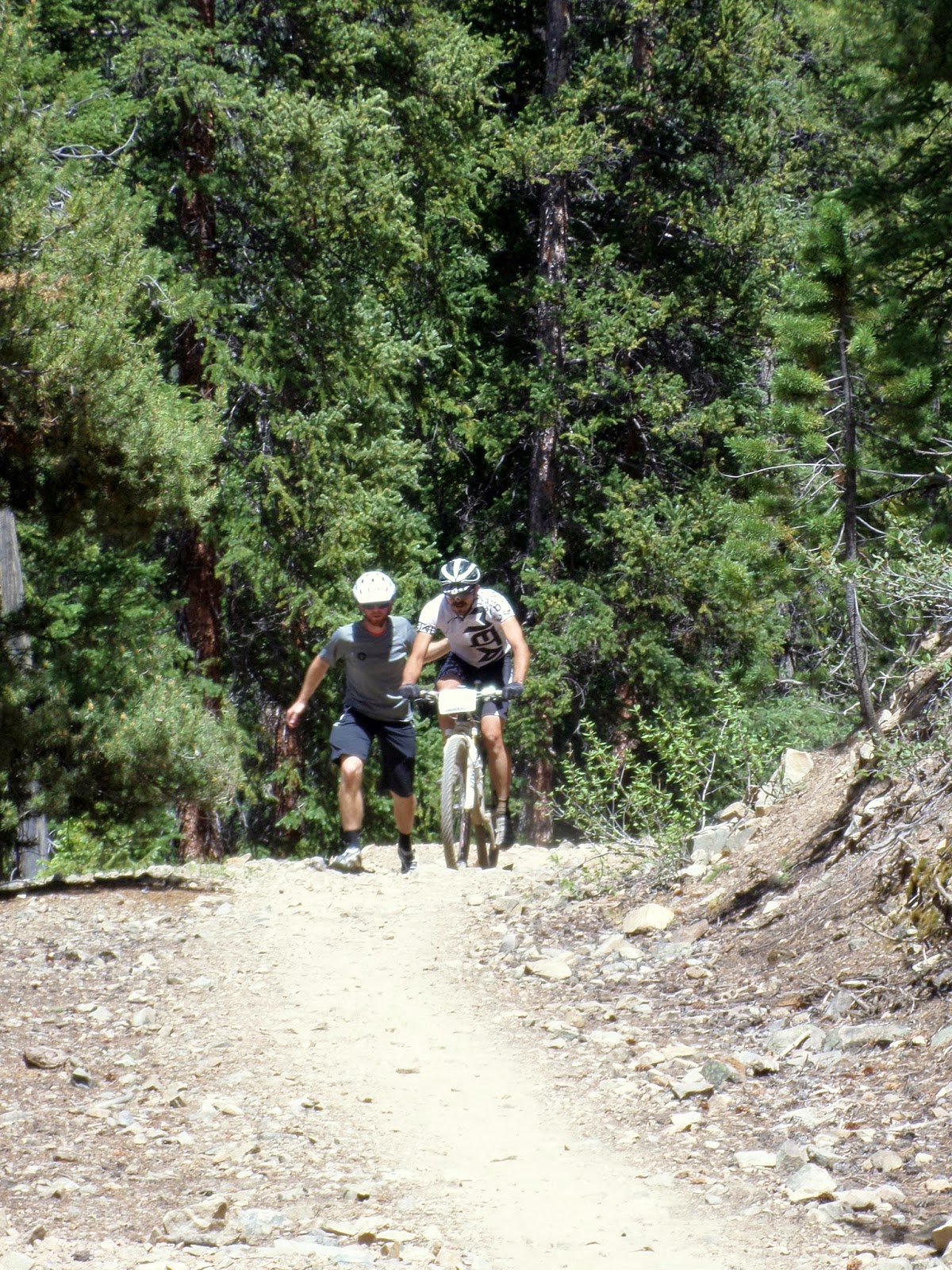 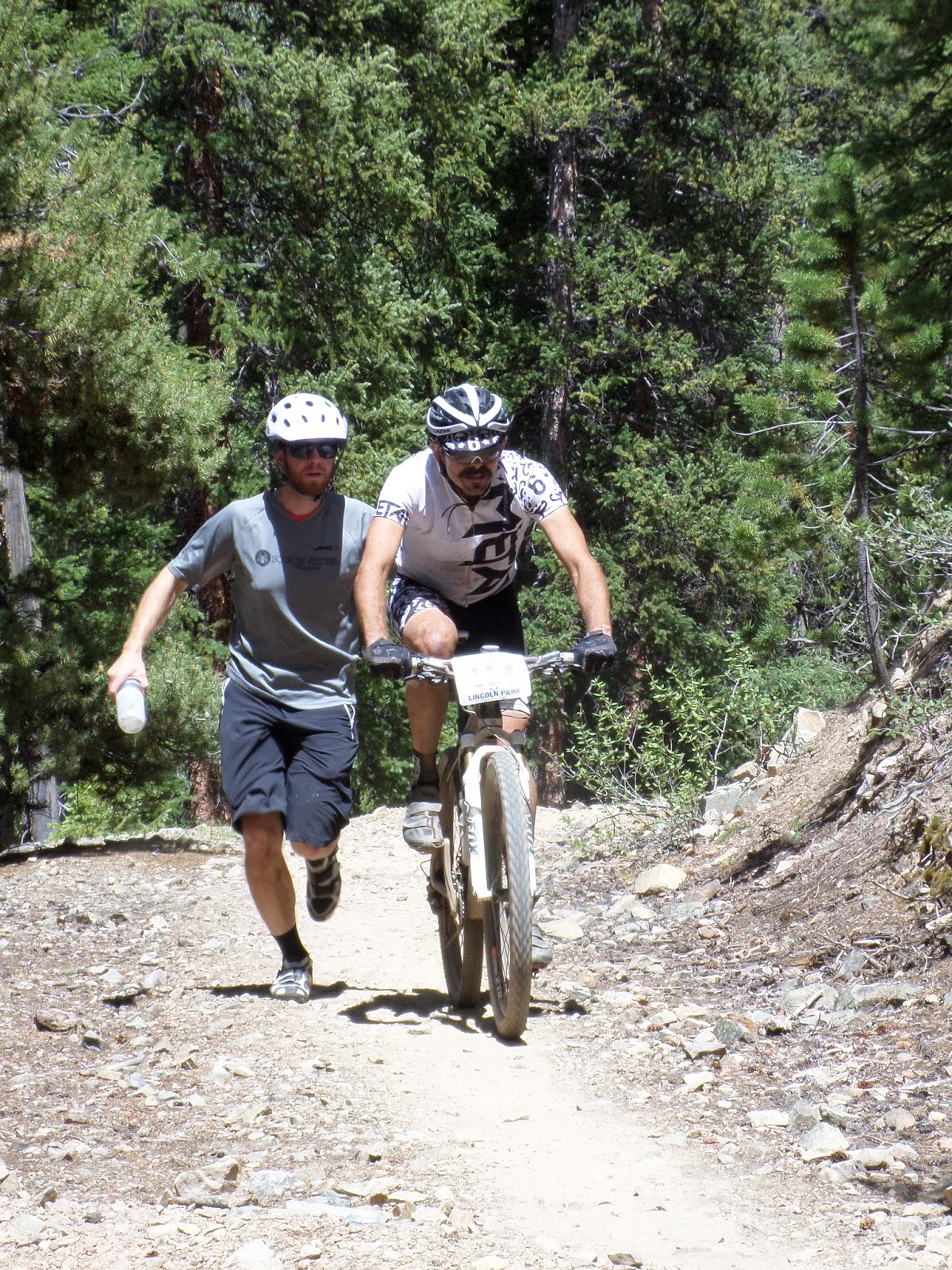 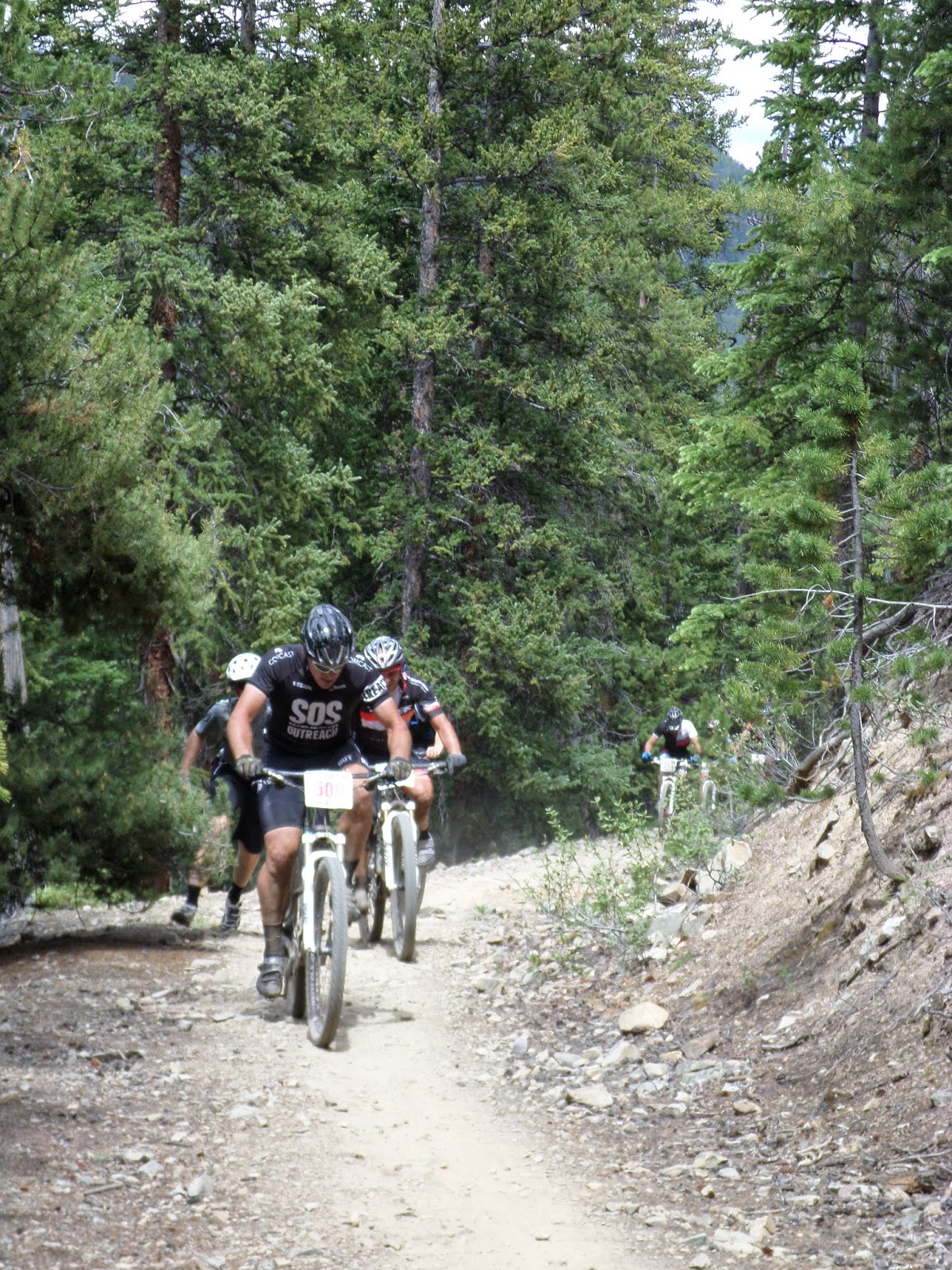 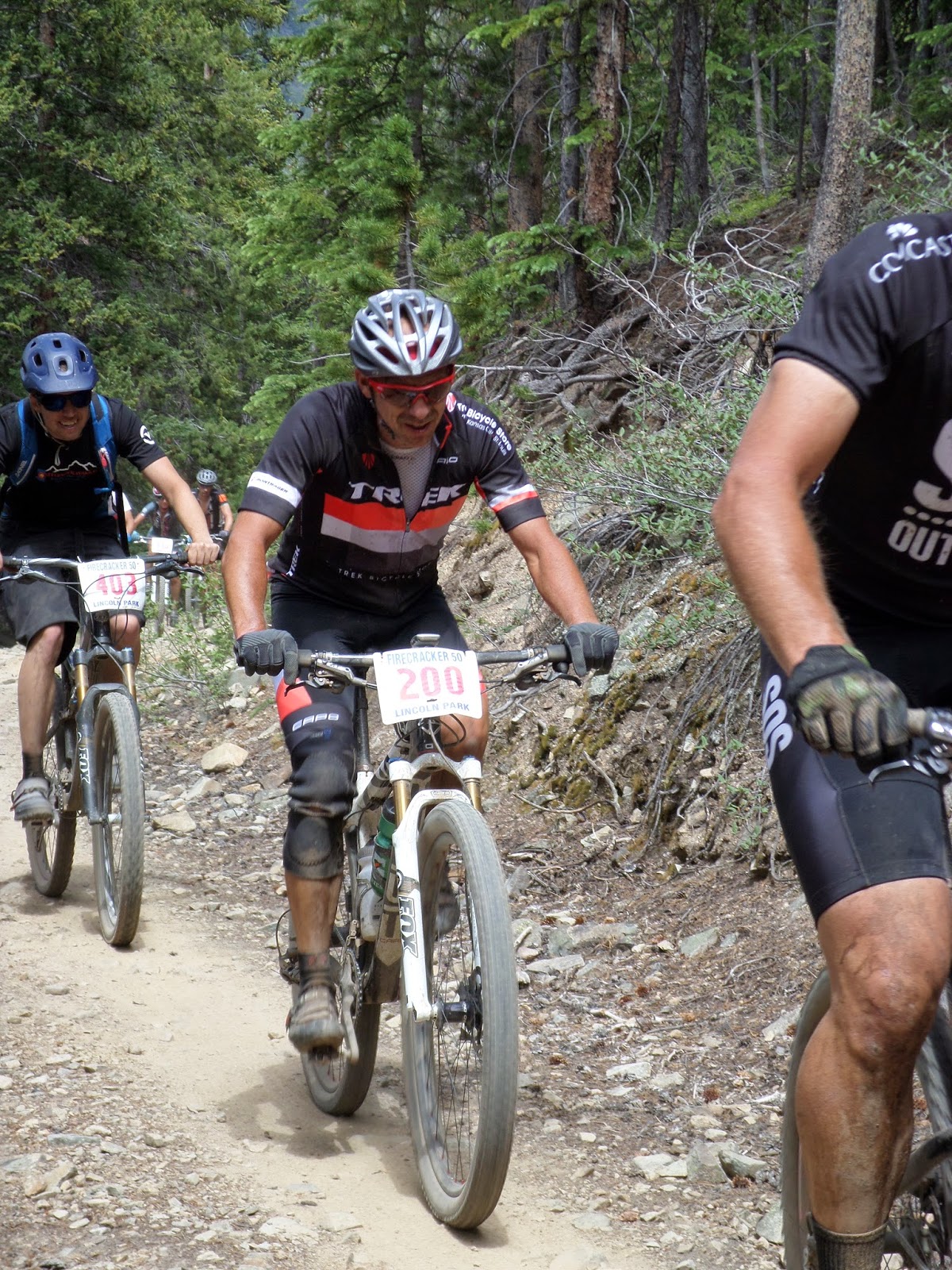 Once we got down to the finish, we hooked up with everyone again to get the lowdown on their race. Dirty and tired but smiling, everyone made it back.

We went for dinner with Lauren and Andy before deciding to ride back to Frisco. NO BIKE FRIDAY! We were bound to our promise that we would be on two wheels the whole day. It was going to be a hard ride back with full bellies and a margarita buzz but what the hell, we were on vacation. It was a nice ride, with very few people (and no moose) on the trail. It's faster from Breck to Frisco, so we cruised into town to pick up some margarita mix to have for the Fireworks later that night. 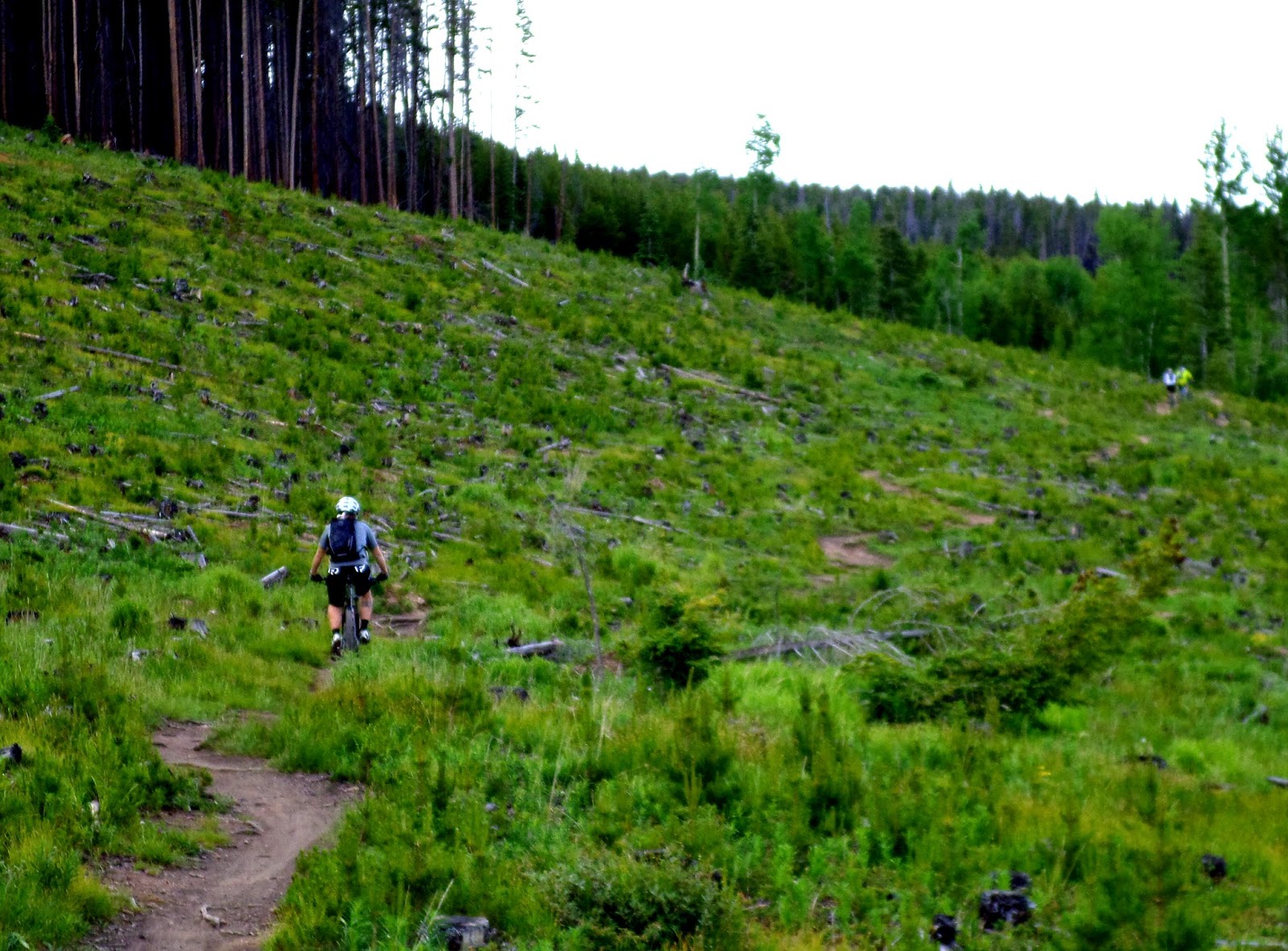 I didn't get any photos but imagine a very large lake with mountains in the background and fireworks going off in front of them. Amazeballs! Lauren and Andy came over to hang out with us at the campsite. It had just finished downpouring when they pulled up. The temps dropped a bit so we built a fire and stood to watch the fireworks show.

The next day was practice day at Keystone. We were up early and at the Resort when the lifts opened around 10a.m. Andy was running late so Ryan and I went up for a practice run to get our legs under us DH style. Talk about a wake up call. But the hero dirt was not to be missed. The rain storm the night before had turned the tracks to glue for the first few runs. The berms were velcro. Elbows out!

I think we got in about 7 runs on the day and I really was able to let the Trek Remedy do its thing. Though it has way more magical powers than I'll be privy to, it gave me a lot of confidence going into the gnarly stuff. (It didn't hurt that I had on some big beefy tires too!)

As luck would have it, we were able to do a few runs with my training coach. He started doing the enduro races this year and was out getting familiar with the course. Though he's a pro XC racer, he's got some chops and could hit all of the gnar with style. I was impressed! He helped cheer Ryan down a particular hairy section, the famous steps on the Milky Way trail, which are super steep. I walked. Though I did have some good moments too. I did clean some stuff I hadn't in the past and also road down a wooden feature that was basically a drop but instead of dirt, it was a wood path (b/c it was fault line). The only way to do it was by following Ryan and he took it slow so I knew I could roll it and be fine. The approach wasn't easy. It was twisty and rooty so you had to pay attention to get lined up properly. I could see the edge of the trees where the drop was located. I told myself to relax, that I was capable and my bike was capable. Ryan disappeared and the edge came to me. The earth fell away and I pointed myself down. As I went over the edge I felt an immediate rush of air like being in the front car on a roller coaster. I knew there was plenty of run out so no matter where my wheel went, I wouldn't be going off a cliff or anything. But damn, did I pick up speed. Holy crap. I can't say it was fun. It was scary as hell and will probably remain scary to me but at least I did it. We hit it again later and yep, still scary!

We spent the day riding and slamming and bouncing and jumping all over the mountain. I got a few shots of Ryan and Andy on some of the more rowdy sections that I walked or went around. 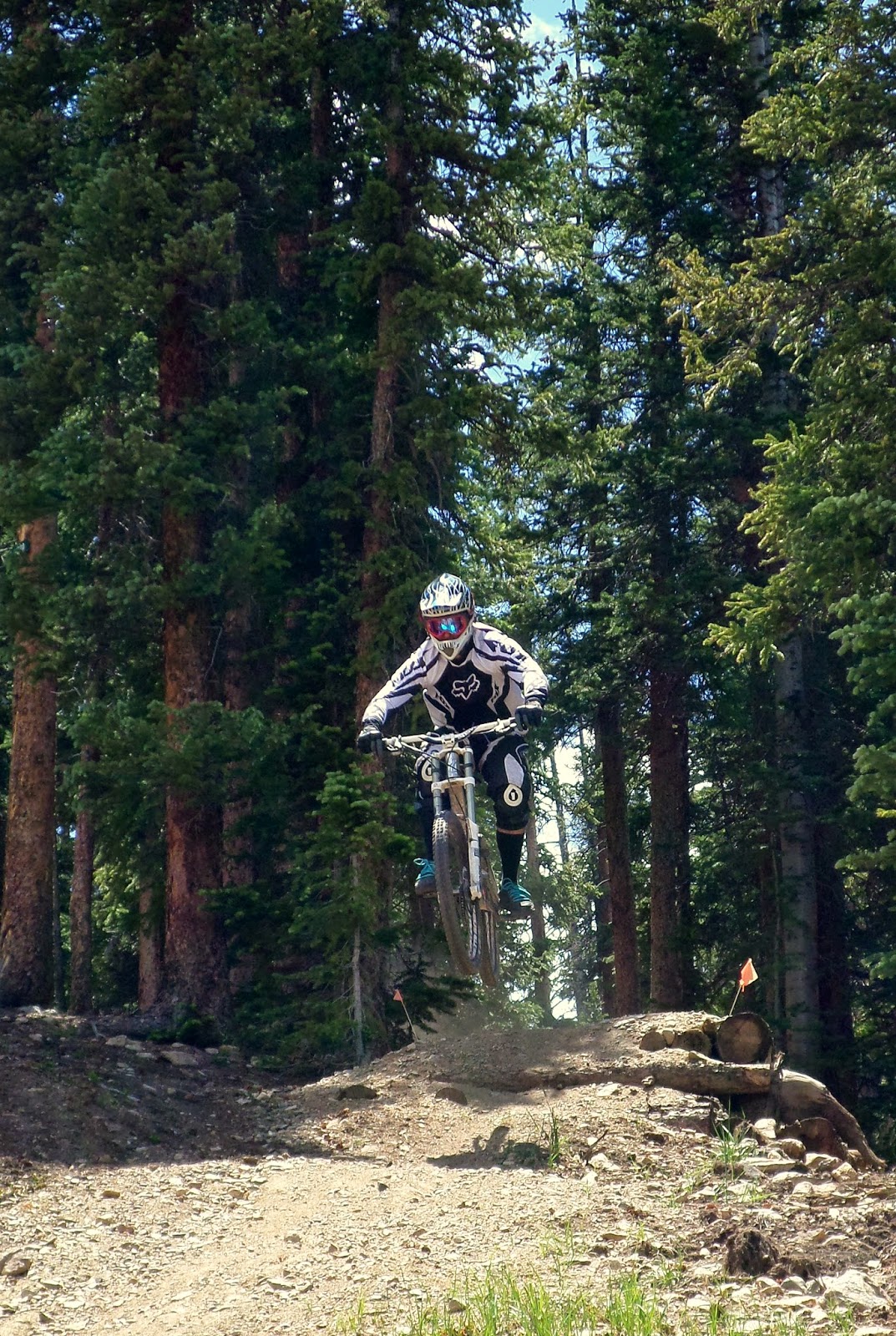 We ended the day in the parking lot, nursing beers. Well, Andy was nursing his hand after washing out in a corner but all is well. He didn't break anything. Ryan and I were able to work out some of the butterflies before the race coming up next weekend. Though I can't expect to be too competitive here, my goal is to get down each run cleanly and have fun. I'm looking forward to seeing some of the friends we made last year and celebrate racing our bikes down to the bottom!