One thing we promised Larry - his birthday trip would be epic with a side of epic. I don't know if it's the altitude or the promise of new eye-candy but the idea of riding up and over Wheeler Pass after a race day was either going to be the ultimate test or the ultimate disaster. Almost as much climbing as descending, we'd have to pay to play but that's Colorado riding. You go up to come down. 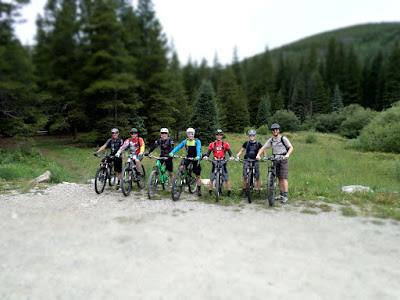 The beginning of the route was a new one for RnR. We've been up there via different routes but Ryan was wanting to explore it from the south and fair warning, there was going to be some steep hike a bikes. We invited my coach, Fastcat Racing's Jason Hilimier, who lives in Boulder, and is always up for long days on the bike when time allows. Sometime between 7-8am the van was locked and loaded and we were off. April and Jenny were riding Peaks Trail with Andy and Lauren. It's a trail between Breckenridge and Frisco and the plan was we would descend Peaks into Frisco and then someone would take Ryan to go fetch the van. Another thing about adventuring in Colorado: you have to be flexible because plans can change. Quickly.

Packed for a full day in the saddle, we started our way up. We had to cross a low creek only a few yards away from the van. Crap! Wet feet. Boo! The trail was a dirt 4wd road that went on and up. Nothing too crazy technical. Just demanding at sub 10,000 ft. This was the climb before the climb, by the way. 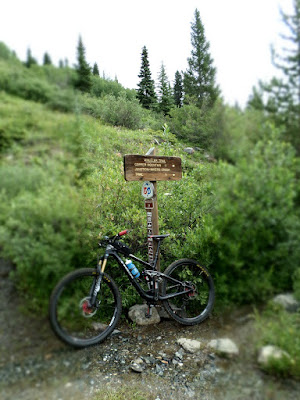 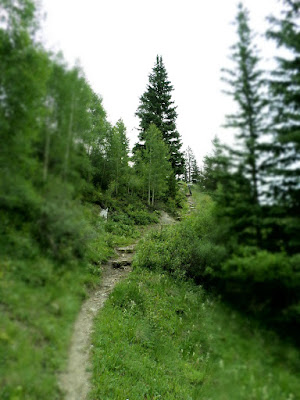 After maybe less than an hour, we found the Wheeler trail head and up the only option. For the next couple of hours we mainly walked our bikes. There were a few fun descents for sure or flowy sections but if you asked me what I remember most about that day I'd have to say the shear altitude gain and that most of it was on foot. It wasn't so bad until we got up into the clouds. The trail was wet, very steep and the temperature was dropping with every 1000 feet gained. By the time I made it to the next intersection (I was last in the group) it was decided that we would have to turn around. The rain clouds weren't simply passing by and we still had several miles of climbing to do. Jason was shivering b/c he only had a windbreaker and everyone's fingers were getting cold from the rain and wind. It was a no brainer. We put on more layers and went back the way we came. 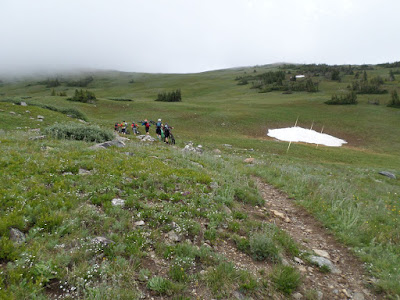 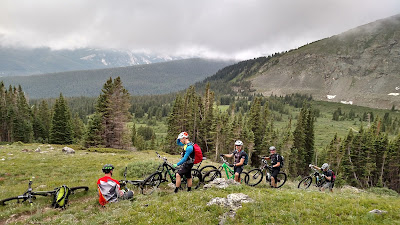 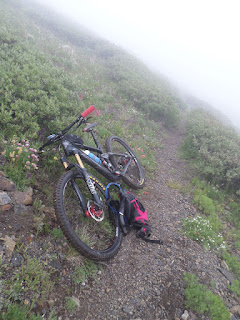 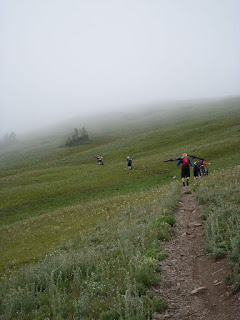 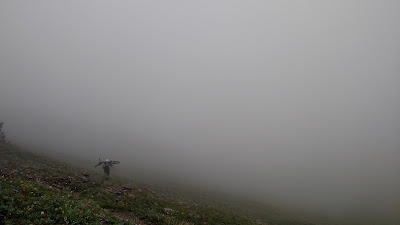 The descent was kinda scary. Some of us had to take it easy as it was not something we were used to riding. We got to an intersection and waited for Larry. And waited. And waited. Finally he appeared, declaring he had crashed and had gone off the mountain! He was OK but knew it could have been way worse. We took it pretty easy until we got to more level ground. Instead of heading all the way back to the van on the steep trail, we rode a wide 4wd trail, Boreas Trail. It was one whoot'nhoot'n good time. Fast and wide open with lots of rocks and roots and just a freaking riot! I'd gladly pay to get shuttled up that for a day. Seriously good times. As we got closer to town, Eyberg got a flat. More standing around made for colder bones. Jason was down at the bottom of a hill with his knees tucked under his jacket, rocking back and forth. We needed to get him inside pronto. We finally popped back into civilization on the south end of Breck and went straight for Clint's Bakery for some hot coffee and food. With everyone inside, Ryan and I, guarding the bikes, made plans to get the van but then something awesome happened. Once everyone had a chance to warm up and caffeinate, they were ready to go out for more. We stuck to the original plan of riding Peak's Trail back to Frisco. That trail never gets old. So much awesome. And as we pulled into town, April and Jenni just happened to be walking by. We continued on to the condo. The sun had come out finally so we all sat in the driveway warming up. I brought out the chips and salsa and everyone enjoyed some beverages, glad to be back, safe and sound.

Despite the setbacks with the weather and not being able to ride the planned route, we still made the best of it and everyone had fun. When Ryan went to get the van, he brought back pizza from a place in Dillon. I think we ate our weight in dough, only to top it off with ice cream sandwiches using chocolate chip cookies Jenny brought (one of the many surprises for Larry - it's one of his favorite treats). With a gut full of beer, pizza and ice cream, going to sleep wasn't an issue. 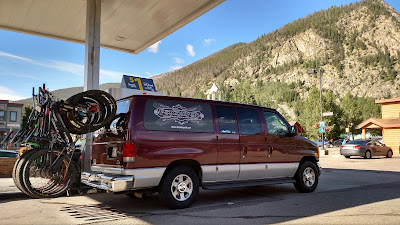 The next day we packed up and headed down to Crested Butte for the second leg of the trip. We added Wixon and EOB would be joining us as well. Nine friends in the Colorado backcountry - a formula for shenanigans of epic proportions!