The farther one gets into the wilderness, the greater is the attraction of its lonely freedom." - Theodore Roosevelt 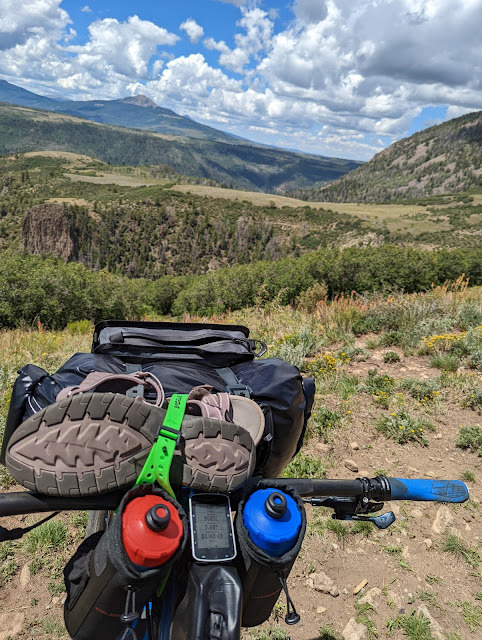 When the gravel ended, the service road began and we were politely reminded that we were about to head into the wilderness and to abide.
The remaining time, about 1.5 hours, was a combination of hike a bike and riding, depending on the pitch. The final climb was all hike, past a dead end sign. Ryan did some recon to assure we were to go past the sign and he found the hut, which was up the steepest climb yet. But what we saw upon arrival was worth every pedal stroke, and every step. The view to the west was absolutely gorgeous and a picnic table was placed in the prime viewing spot.

First things first, we opened the hut and surveyed our resources. That meant for me, finding the commode to get out of my diaper. It was a out of sight but using the well-traveled trail leading away from the hut would take me there, I found it pretty quick. Next, I put some of the camp soap we brought into a bin and filled it with water from one of the 5gallon jugs where I washed my chamois and socks and hung them on the close line.
Next, I found my bunk and put on my clean clothes and sandals. I found some snacks, Ryan made a pot of coffee (local stuff from Fruita) and then sat my ass down on that picnic table for most of the evening.
And this was pretty much the new routine unless it was our turn to make dinner. Andy and Lauren took dibs on making dinner this night: a large pan of chicken enchiladas that we scooped up with a bag of tortilla chips. Who knew canned chicken could taste so good! All from the recipe book SJH provides along with everything to make such a feast. Post dinner, some people took naps, others fiddled with their bikes. I took a little wander and found a rock out-cropping to hike up to. There were no sounds except for the wind in the trees and the calls from the birds, well, until some campers down below started cranking Cold Play, ruining our little oasis. Eventually, Ryan yelled "PLAY RADIOHEAD" and their music got much, much quieter.
The first day, looking back, was the one of the best of the trip. It was a hard start for sure and a good kick in the pants for what was to come, but the views were just amazing. The sunset lasted for quite a long time and it was hard for Ryan and I to go inside.

Just before sunset, a ground squirrel perched himself on a small rock outcropping, and it sat there for a while, looking like it was admiring the view, like we were.
Needless to say, we all were a bit jealous of its lonely freedom.
Posted by Roxy at 6:40 PM