So, when the overall expectation doesn't match the outcome, then I must look back and appreciate the small victories.

What a line of bullshit.

Nah, it's all good. I really wanted to have a solid race but this year's Firecracker 50 eluded me again. My first mistake was watching Titanic the night before. It must have mellowed me out TOO much. What was I thinking?

The morning started off on par feeling tired from lack of sleep. Pretty typical. I whipped up some whole wheat p-cakes covered in Agave Syrup and Peanut butter and downed a couple eggs to keep the hunger pains from coming too early. I washed it all down with a cup of joe and settled on the couch for a bit to digest, stretch and watch The Tour. (Phil Liggett has a way of calming me down. Must be something about how he pronounces the names of the French castles).

I had set out everything the night before so really all I had to do was kit up. About 7:30 I tore myself from the couch and did just that. By 8am I was ready to roll. We filled up our bottles and took them over to the finish line area where aid station trucks waited for pick up of provisions. The race provides water and gatorade but we'd rather go with what we're used to so we premix it all and have it sent up.

For the next hour I warmed up around the neighborhood where we were staying, which was only a couple blocks from the starting line as well as the finish line. That made it super convenient for hitting the toilet multiple times from pre-race jitters. I was worried that I'd pee out all of the water I had in me before I even got started.

Finally around 9:15 I headed for Main Street. True to form, it was packed. Wall to wall people lined the street to watch the riders pass by on their way to their own personal pain cave. Our group was behind the Cat 1 50+ guys. All Cat 1 women and SS were grouped together. We had calf markings to identify our categories but I couldn't really see who was in my group. Turns out, there were only 3 of us. 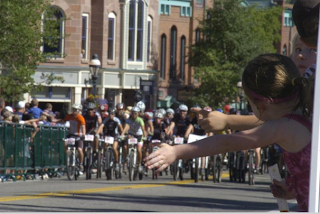 When it came time for our roll out, we strolled up Main Street, slapping hands and enjoying the moment. A woman and her two girls with decorated bikes lead us out. Once they peeled off, the race was on. It started off very mellow. One woman jumped off the front immediately and couple more soon after but for the most part, the group stayed together up the road climb. I just kept telling myself to stay steady and breath. As the road got steeper we started to string out. Then other categories started passing by. After a couple of switch backs and around the last turn, past the whiskey shot ramp that folks were trying to steer riders towards, the road turned to dirt and leveled out. Okay, time to breath again. For the next 3 miles or so the road wound its way around the mountain, gradually taking us up to above 10,000 feet. This part of the course is a bit waining on the psyche as with each turn you hope it's the aid station #1, which meant we would be at the top. Once I did reach the top, I grabbed a volunteer's offering of water, poured it down my throat and on my head. I tossed the bottle in a bin before hitting single track. Finally. 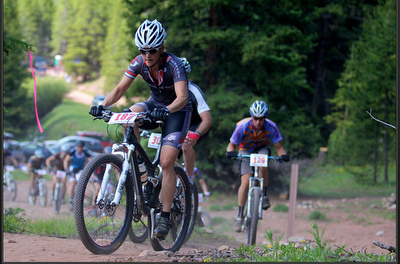 We pre-rode this part of the course a couple days prior. We knew about the slippery, slimy sections that stubbornly held on to the last of the snow melt. Think of moto whoopdeedoos with water. Good times. Then at the bottom of a few descents were puddles that spanned the whole trail. Bike wash time. Nothing like wet feet at mile 7 of fifty. Yay for dry, arid mountain air.

Once through that, we were sent to a new section of single track that went around a closed section of trail (Iowa Mill) that in the past we had to climb on rocky single track that only had one line unless you were a mountain goat. I was so glad I didn't have to do that climb. It comes too early. This meant for more energy later on Little French. The new single track section was a blast; downhill, tacky with berms and turns around trees, rocks and roots. I had a smile from ear to ear.

The next section was also new. Usually we bomb down a gravel road, which is also two way traffic for racers coming up. Yes, very dangerous, especially this time where folks would certainly be trying to go into the oncoming lane to avoid puddles, etc. So the promoters took out part of the road descent and sent us on single track again. This part was super tight, no passing whatsoever type stuff. 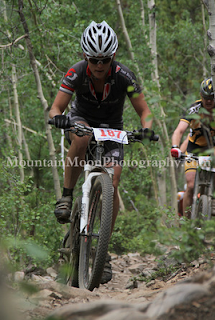 In the middle of it was a bridge made of logs that was about 10ft off the ground. It was covered with a mesh screen for traction. When we test road it prior to the race, I had to stop and look at it first. I tried going around it but that turned out to be sketchier than riding the bridge. I knew I had to do it so I did got up the nerve. I just looked at the end of it. It was bumpy and had a dip in the middle but I just said keep pedaling. To my relief, when we got to it during the race, there were giant bean bags underneath. Once through that section, we were back onto Sallie Barber road towards aid station #2 and the dreaded Little French climb.

I stopped at the aid station and swapped bottles. I put down a goo and a bite of Lara Bar and was off. I was following a few ladies, one which was in my cat. I made an effort to look at my computer at the start of single track: 1:19. From here it was about a mile to the top. ONE LONG MILE. 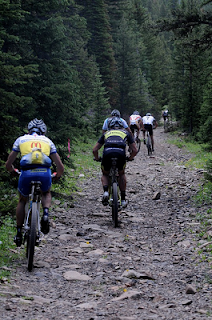 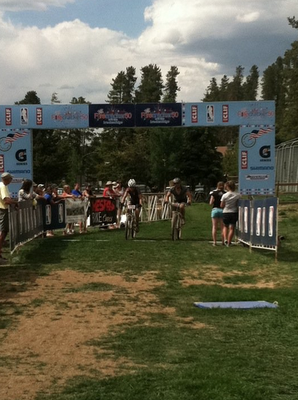 I looked up after crossing the line and there was RF in street clothes (uh-oh) and the Eybergs, all smiles and high fives. I was wishing for low fives, actually.
Six hours, thirty minutes. So ridiculously slow it's embarrassing but oh well, I finished. I willed myself to the end. This will to finish also put me on the podium for 2nd place but it's not one I can really celebrate. I was at the bottom of all the women who raced in Cat 1 so yes I was disappointed. Cool to have hardware to show for my death march but bummed that I could't enjoy the race more because of how I felt.
Anyway, it took a good 30 minutes before I felt that I could make my way back to the condo. Once there I sucked down a coke and ate some chicken and watermelon. I started feeling better. Hmmmm, I wonder why (sarcasm). I only burned 3200 calories and lost 5 lbs. in water weight! I literally had nothing left but it's not because I used my resources improperly. It's because I didn't use them at all. Lesson: eat before you're hungry and even if you don't feel like it.
As I mentioned in the opening, ya gotta look at the small victories to appreciate the effort. I climbed Little French handedly the first lap, I didn't crash, I was able to change my tire without issue, the new single track was the bizzomb, I finished with a friend, Todd had a great race and even though RF didn't finish his first lap was amazingly fast on a longer course. There are enough good things about this event to want to return, so the answer is yes, we'll be back in 2012. There's no doubt about it. 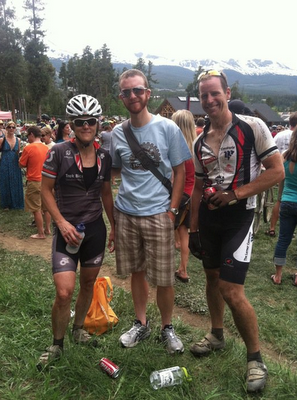