Saturday was a fun day. I had been looking forward to racing at L&C for a while, having missed it last year in exchange for volunteering. The trail leader at L&C, Todd Eyberg, had been reporting great trail conditions for weeks and with the floods, etc. I hadn't been over there in quite some time. I did a recon ride on Friday to make sure the barrage of storms hadn't created a reroute or a new log over. Nope, same ol' same ol' and I knew it well, except for the new opening downhill "Double D" but once it hooks up to the 2nd part of the descent down to the post, it's like old times. I took that trail knowledge and used it to my full advantage. I had to: ladies that know how to descend and ride bikes fast were in line right behind me and then after them were the Cat. 1 men, one of which was the hubs. No way was he going to catch me! So off like a rabbit I went down the hole, past the pole, down, down, down, hard left, hard right, keep descending, power climb then to the left down around a couple more short climbs with steep descents, now power through the flats and up the next climb to the trail of old. My legs felt great and I kept my breathing manageable. It was pretty sticky save for a light breeze. My goal was under 25 minutes. I drank on each of the few flat areas. I only brought with me a half bottle, knowing hydrating was not going to be a priority. I did pack a flat kit. Mosquitoes are the size of bats in that place and I didn't want to get stuck walking out and getting sucked dry. Luckily, I didn't need it. I say lucky b/c I was using a brand new rear Bontrager tire and had no idea of it's feel on the trail. It seemed to hook up just fine. The race ended with nobody coming by and a solid time of around 24 minutes and some change. It had been worth the wait! Thanks to THOR and the Velo Veloce guys for getting the course in fine shape for the event. It was a blast.

NO TANTRUMS AT TRANQUILITY

Sunday was going to be one of my toughest local races. Not only was it hotter than blazes, I finally had a group of ladies to race with and the best part: two of them were in their 40s, like me! How rad is that! (Katie, hang on to your youth, honey!) 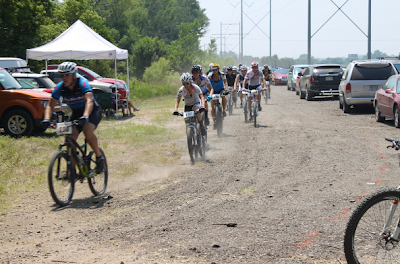 We started with the Cat 2 45+ men. All the ladies lined up, then the dudes. (Thanks, gentlemen). The gun went off and it was on. One Cat 2 dude lead it out, then me, then Sydney, then Andrea and the rest. My goal was to not blow up on the opening climb knowing there was some technical riding coming up. I think we passed the guy that lead us out of the start gate, then the back of the cat 2 35+ guys. I rolled down the descent with Sydney on my wheel. I cruised through the trees at the creek and over to the north side of Fort. It had more open areas to pass so I kept the speed high going through the trees, passing folks as I went, trying to use my passing confidence as a deterrent. No luck. I could hear riders behind me. I blasted around the open 4 wheel drive road and back into the trees. Knowing the false flat would soon turn into a flowy descent, I again kept the speed ramped. Syd was on my wheel, even as I picked off riders. As I turned the corner, I opened it up, but not too crazy. That section is so freakin fun it was more of a joy ride than a race. We popped out of the trees and into the open and if I was going to get passed, this was the place: there were feet on either side in which to launch an attack. But it never came. I continued back to the trail head and onto the regular course. At that point, I knew I'd have a bit of relief coming in the next section of tight single track so I motored hard for it. The switch backs are plenty and so are the trees, which requires some threading of the needle to get through. Again, hoping my trail knowledge would help me, I dove through, seeing nothing but the trail coming up. Once through the pinetree section on the north side, I started to catch more 35+ guys. Of note, the Wieland brothers, who kill me with their massive pedaling prowess: racing on flat pedals and kicking major ass. They politely let me by and it was time to climb the switchbacks up to the south hill. I passed Chris "Priceless" Price water stand and didn't take a cold one from him as I was on the attack and wanted to get to the camel humps as I knew those could pose a technical problem if not handled right. I got over them both and began my descent down the hill. On my way back up towards the ridge, I did not see the other ladies coming down. Hmmm. I had a gap. I cautiously made my way down the insane ridge line and back to the start finish for a bottle swap, goo and a wipe down. I was a sweaty mess. As I jumped back in line, the Wieland brothers and another went by. I jumped on their wheel and stayed with them up the hill. I was still feeling good as I crossed under Fort St. I told myself to not let up but the many glances at my computer read high zone 5, or about 180+ hr but I didn't feel bad or feel like I was breathing all that crazy so I assumed it was the heat so I backed it down to 170s and made sure that I didn't blow up going through the pine section, with all of the switch back climbs. I think I got passed by one guy after that and from there on out, I was pretty much by myself. I felt great after lap 2. Coming into the pits, I repeated my routine and was off for the final lap. I could tell my body was starting to slow down so I started taking things a bit easier on the more aerobic sections and pushing the down hills. And the heat. Holy sun flare! Chris Priceless Price was my oasis. Those mini water bottles were heavenly; even though I wore them more then drank them. Thanks, Chris! I so the rest of the race I went uncontested but never did I let up too much. Andrea is an adventure racer which means the girl can suffer and I didn't want her sneaking up on me. My jedi mind failed me in the trees next to the soccer fields on lap 3 as I clipped one, taking me down to the ground in an instant. I have a nice bruise to show for it too. 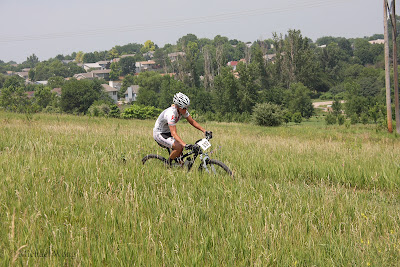 I came into the finish around 2:15, each lap almost the same. It was good to finish feeling strong and not the wet noodle like in Breck. I liked the format of everyone racing together. I enjoyed seeing so many other racers on trail in different areas. It made for some fun action. 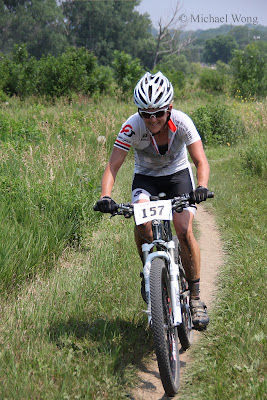 All in all it was a great weekend of racing. And from the posts on the Psycowpath facebook page, I'm not being biased. It blows our minds that folks thank us for helping them suffer but we get it. We know what it means to push our limits. And this weekend did. So thankful to see a full podium of Cat 1 women and all of the other happy, dirty faces of everyone who participated. Makes it all worth it.
Posted by Roxy at 7:50 AM
Labels: psycowpath