After an extremely busy spring full of travel, racing, promoting and clinics, it was time to be gone.

Our 2018 version of the GWO Tour once again had us driving the MTBLIMO to Wyoming first before making our way around the Rockies of Colorado by way of Aspen, Summit County and finally Nederland. Slowing down, living simply out of the van, and being off the grid was like taking a week's worth of happy vitamins. Spending time with each other and friends in the mountains centers us and reminds us what really matters.

DAY 1
WY is the answer. It’s the answer to dry singletrack-starved mountain bikers looking for a place to get out there. Way out. And since we were going to be racing the Laramie Enduro XC race (they were enduro before enduro meant something else) at the end of this month, we decided to check out the new course on the first day of our trip. Having raced it about 9 or so years ago, we thought it was time to return. Plus, Laramie is a cool cowboy town. Reminds me a lot of Gunnison; not too small, not too big and and not overrun by vacationing tourists. And because they have a University, the town also has some style and culture.

The trails for the course are in an wilderness area called Happy Jack. We parked in a camping spot that hadn’t been mowed yet this year and the mosquitos had taken over! On us the minute we stepped out of the van, we were forced to get a move on as soon as we had our coffee down our gullets. The husboy brought his Fuel Ex to find out if that’s what he was going to race. I was on my Remedy but I’ll be racing the Super Fly. To my surprise, parts of the track were super rowdy with loose rock and boulders on a couple descents. The Remedy was actually a good bike for those sections. Enough so, that I’m considering a dropper post for the race! 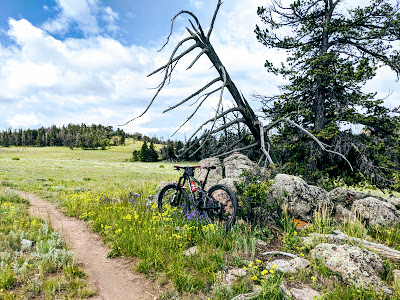 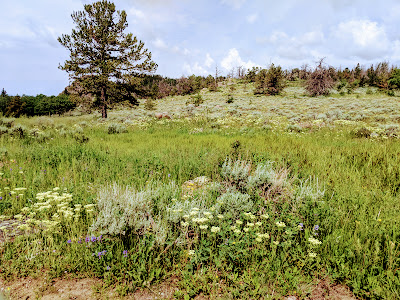 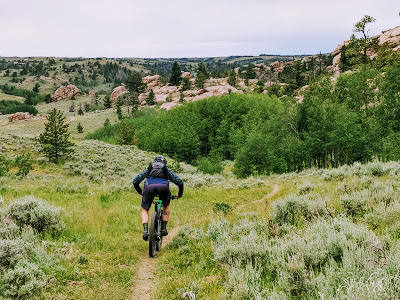 The 30ish mile course was challenging. It had a mix of terrain that made us work but also made us smile! At one point, we came across three empty hammocks and a sign that invited anyone to sit in them and enjoy the view! I happily obliged! 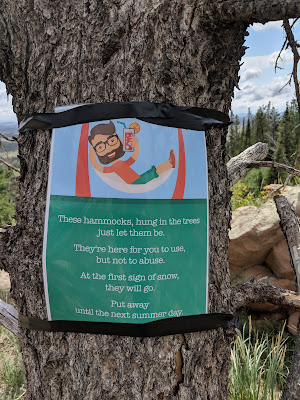 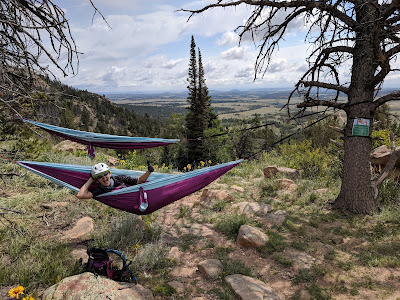 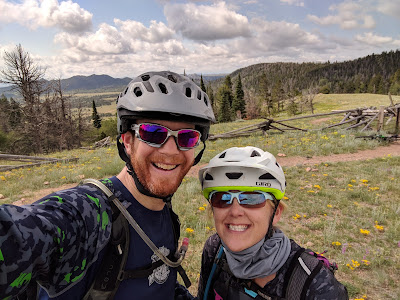 After the ride, we drove into Laramie for some awesome noms at SpeedGoat, just beating out the rain we had been seeing on the horizon all day. Speed Goat’s take on burritos blew our minds and filled our tummies! I recommend the curry chicken! Delish! Of course we washed it down with some margaritas and then we went to Coal Creek Coffee for our afternoon pick me up!

By this time it was mid-afternoon and knowing we had a five-hour drive to Aspen, we decided we’d get a head start instead of staying another night in mosquito village. We took some back highways down through Colorado as we listened to a great podcast titled “The Making of Obama”, about how he got started in politics. It was as inspiring as the views out our windows. The probability of him becoming president was as likely as me becoming a down hill racer. So many obstacles and insurmountable odds were stacked against him, yet he prevailed. After listening to that, I decided to quit my job and start training for the World Cup. No, I didn’t. Along the way we saw many firefighters stationed at wilderness entry points. The wild fire potential was very high in that area. We even came up on a main meeting point where dozens of firefighters, helicopters and trucks with water tanks were at the ready in case they spotted smoke. It was the first time seeing that much firefighting power out in the open. There were no fireworks and no campfires our whole trip but not having wildfires sorta trumps our camping desires.

After a few hours down the road we found a place outside of Eagle, Co to “vamp” (van-camping for those of you wondering) thus allowing us to “park” rather than “camp” at trailheads. A lot of times, they have portpotties or pit toilets. This spot had a view and a toilet and a bubbling brook nearby. That’s like winning the lottery in the vamping world, even if it was just a parking lot but that was fine by us. We just needed a spot to crash for the night before heading to our next destination - Aspen!

The MTB Limo has some new additions. Ryan built a very handy cupboard/table for early morning coffee brewing without needing to step out of the van! We also added a layer of reflective insulation over each window using velcro squares (which will be replaced by suction cups). The idea was to help keep the van warmer on cool nights and cooler on hot days and I have to say it worked awesome! The material comes in long rolls from Lowes and is easy to cut. It's sorta like bubble wrap. On top of the thermal benefits, it also keeps the inside nice and dark for better sleep and more privacy. We didn’t need our large heater at all! And when we came back from riding each day, the inside wasn’t at baking temperature. Not bad for DYI. 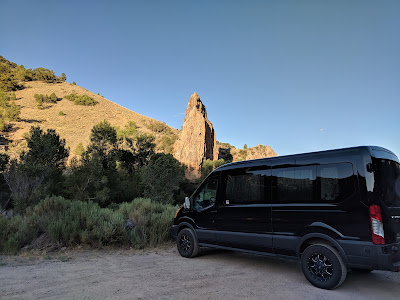 The next morning we got up before the sun because some race promoter thought it was a good idea to open registration in the early morning. We had to get up and drive until we found cell service before 5:30am! After getting it taken care of, and since we were up, we turned west and then south for Aspen. Again, taking roads less traveled (by us), we made the most of the drive and the scenery. That’s the great thing about our GWO trips. Though we are dying to get to the trailhead to ride, we like taking new routes to see what there is to see. Kinda just like we do on our bikes. 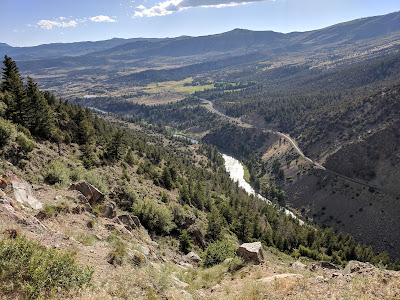