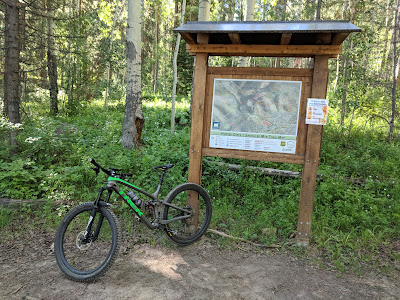 We arrived in Aspen before the town was barely stirring. Getting to the trailhead that early was key as it was a very popular trail, and on a holiday weekend, parking was gold. In fact, that set the tone for the whole trip and we purposefully got up and going early each morning before the hottest part of the day, giving us much more time to either find a camping spot and sight-see.

The 30-mile loop started on a very popular hiking route used by many locals hiking with their dogs. Having a dog is very hip in Aspen apparently. We climbed for a solid 20 minutes or so (luckily in the shade) before stopping at an old mine shaft called the Iowa Mine. 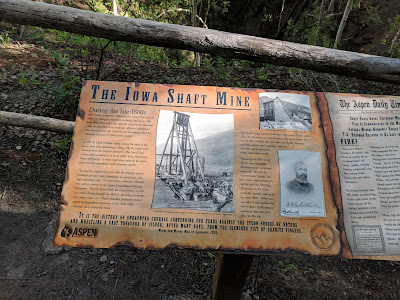 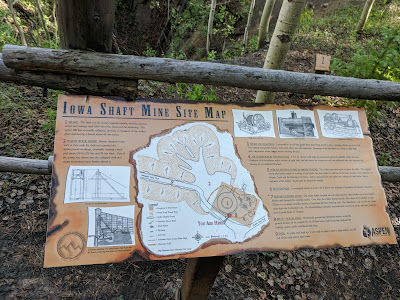 After exploring a bit, we bombed down a nice rowdy double-track, dumping us into the backcountry and away from anyone else. Or so we thought. The next up was a rather grinding gravel road that had some great views. We think we spied some bear tracks! 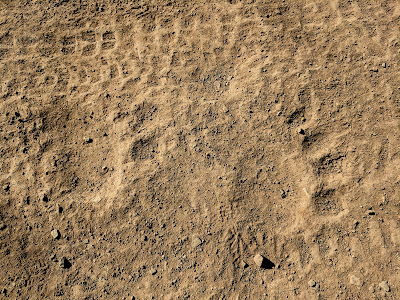 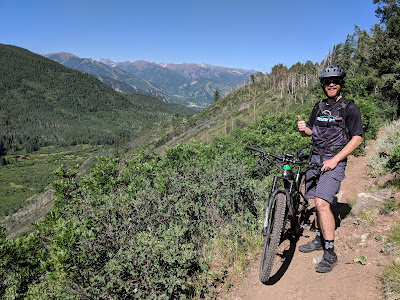 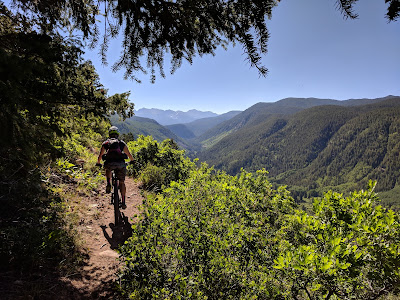 Before dumping back into single track we took a detour up on a hill to see what we could see. At the top, fields of flowers were bowing to the sun with a view of the Maroon Bells mountains in the distance. It was worth the climb up! 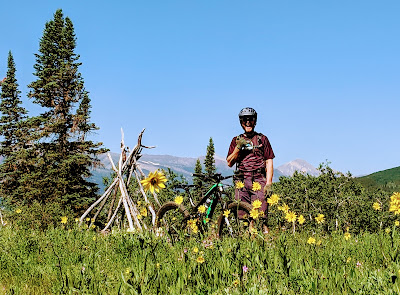 And just before we went back into the trees we stopped for a photo of the next trail head sign, Hobbit, for our friend April who loves all things Hobbit. And good thing we did! As we were about to mount up, we saw a fast-moving rider coming up the trail: 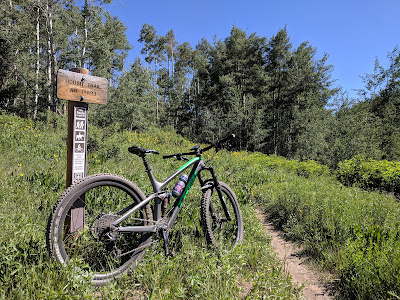 Ryan: That guy’s moving. Let’s wait and let him pass.

I looked down the trail at a nondescript looking rider in a sleeveless jersey and Camelbak. Probably some dentist getting his morning ride in, I thought.

Lance: Hope you’re ready. This is a stinger!

Yes, that Lance went riding by on his mountain bike and I pretty much went into shock and I don't even remember if I said anything. Ryan took off of course to try to stay with him. Classic RF but like he said it definitely was a stinger, so I hobbled up the steep terrain, finally catching up with Ryan a couple minutes later. For the rest of the ride, we were kinda on cloud 9. Had we seen Lance Armstrong in a bar or even on a road bike it wouldn’t have had the same effect. But to see him during the wee hours, in the backcountry, doing the same thing we were doing was over the top! I’ll never forget it! Yes, he looks just like he does on TV!

We continued on some fun twisty and techy trails in the trees when soon we came upon this awesome swing made with climbing rope! Ryan had to give me a boost to get up onto it. I was a bit timid at first but trusted it wasn't going to drop me like a sack of flour into the brush. It was a riot. If riding bikes in the woods didn't already make me kid-like, swinging on a tree swing certainly did! So unexpected. 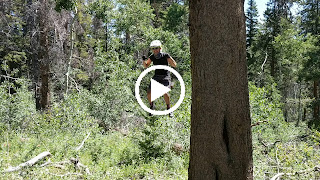 We continued riding through some pretty dense old-growth aspen forests. Much of the trail was bench-cut with a very steep slope on one side. I had to really focus and stay steady as to not clip a bar or go off the trail. I'm not gonna lie, I was a bit nervous! 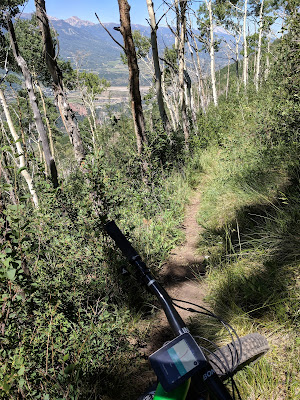 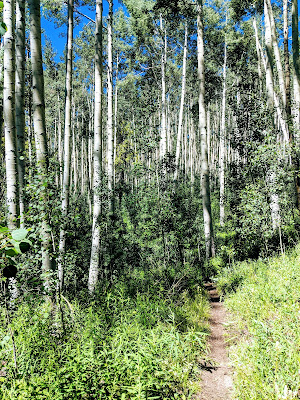 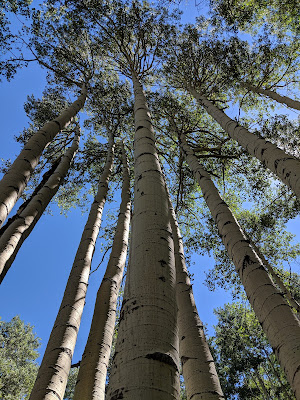 As we neared town the end of the trail it took us down some very steep moab-style terrain. It was pretty rowdy and loose, plus it had horrible site lines in spots from overgrown scrub brush. We had to stop for a few runners coming up, which wasn’t easy! Overall the Hunter Creek / Smuggler route was a great ride for many reasons: lots of terrain change, great views, and a swing! It was a tad warm but starting early was the key! 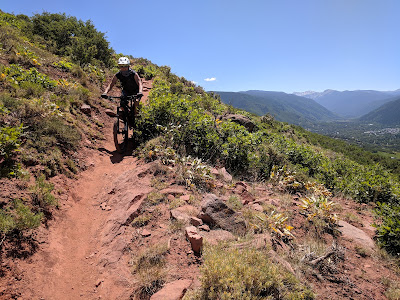 Once we got back to the Limo, we made lunch right there in the trailhead parking lot and thinking it would be a nice refreshing way to recover, we went for a splash in the creek that ran through town. We donned our bathing attire and rolled down to a bike path. On our way we found this really cool sanctuary that was a tribute to John Denver. It had many large boulders with his songs and poems by other famous people carved into them. So amazing! 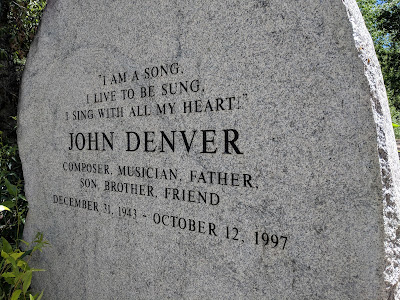 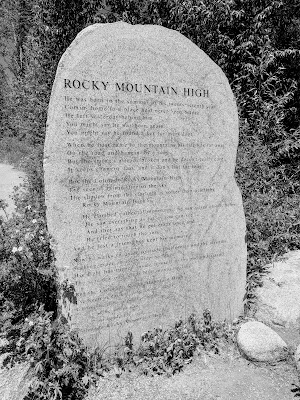 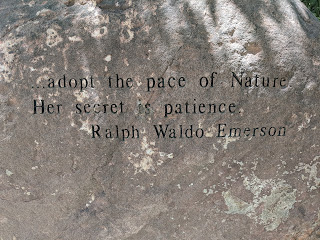 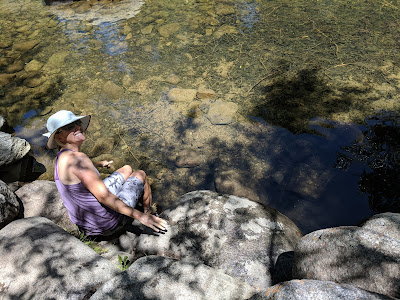 After being denied a coffee destination to get our fix, we got the hell out of town. About 30 minutes up the very narrow and winding road towards Independence Pass we found an area that allowed camping called Lincoln Gulch. At the entrance a sign said 4WD only so we decided to scout the road first on bikes to make sure the Limo would make it down. It would be bumpy but doable. Luckily we found a pretty cool unofficial spot along a bubbling river with its own “reading tree chair". I explored the river rock beds and saw a baby elk. An evening hike up the road after dinner made for some fun discoveries of cavernous falls carved by fast moving water. 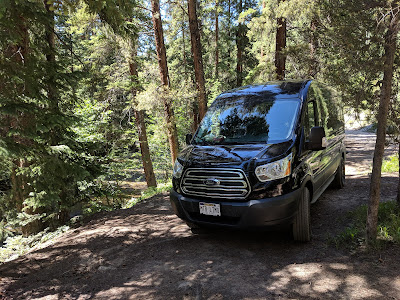 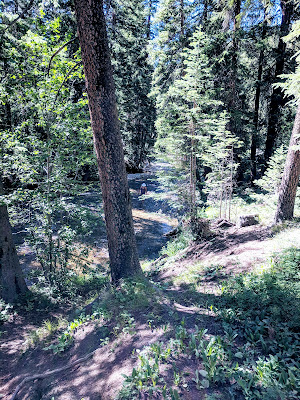 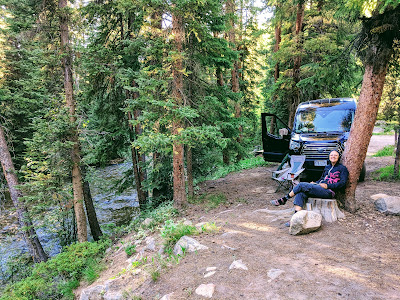 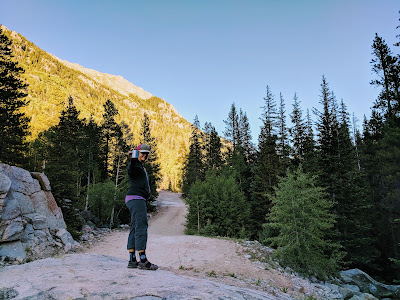 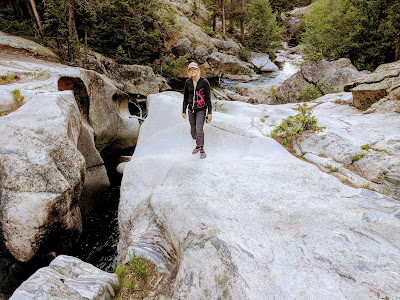 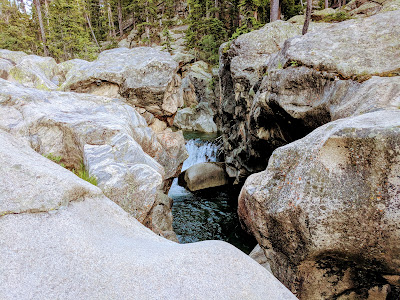 Away from humanity, alone with our books and booze, we were in our happy place. Sleep came pretty easy as the sun disappeared on another pretty amazing day on bikes.