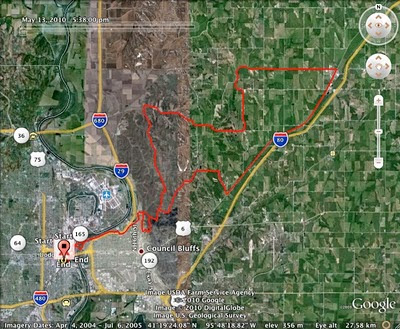 Not when you're on the trailing end of a group of fast dudes who don't let up. It was a motley crew of roadies and dirties that met at the Ped Bridge, per Gary Nebeker's request. Some of us were tired from previous riding or working and others hadn't ridden all week b/c of the rain. But one thing we did share was the need to celebrate the long-awaited arrival of the sun. It was a bit windy, however. That works to my advantage b/c it keeps the fast guys from going super human so I can stay with the group and even pull through. But once we got to the monster hills, it was like having a cinder block in my back pocket. It's always impressive to see riders seemingly just spin up these precipices, even though I know they are breathing just as hard as I am. But despite the pain and suffering, the route was spectacular with winding asphalt farm roads that had little traffic. Everything seemed greener and the air smelled cleaner.

The group got splintered early with some riders waiting for a late rider but everyone regrouped at mile 17. Only 30 more to go. What? It was fricken 7pm and we were in BFE. The race was on. Not with each other but with the sun. Some of us had reflector lights but we really didn't want to be out in rural Iowa in the dark. So, needless to say, the TNR suddenly became a Totally Narly Ride. It was fast most of the way back. Again, the group broke up due to some cramping and bonking issues but miraculously we all met up again due to their cunning back road bush wacking. You'd thought the pace woulda mellowed but that only happened when there was a sandy corner. Hill after hill came at us like an asphalt tsunami. The last grunter took it out of us back of the packers. We were pedaling squares.

Luckily for me, I brought my bike to work (which is downtown) so I didn't have to ride all the way home too (which ironically is mostly uphill). I arrived just after Ryan did and the first thing out of his mouth, "What do you want from Qdoba?" Great minds think alike.

All in all, it was a great ride. After not getting in a hard ride on Wed. due to my shitty attitude and time restraints, it's what I needed. Thanks for ride, guys!
Posted by Roxy at 12:19 PM