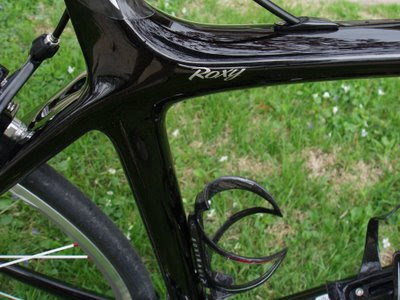 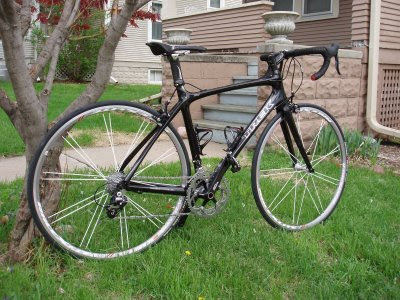 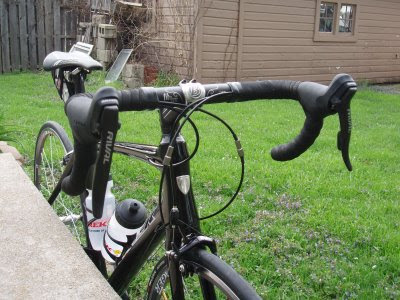 Say hello to the latest addition to my fleet, Trek Madone 5.5, a.k.a. the Death Star. That's what they should have called the custom paint scheme instead of Starry Night. The black actually has tiny sparklies all over it, making it look like, as PB said, the universe. Very well said.
All painted and pedaled up, she came in at a smear 15.9-16 pounds. Hell, my co-worker's dog weighs more. But I didn't get it for just a weight issue. My Kestral was really needing a significant drive train overhaul and well, I guess it was time to stop riding a TT bike like a road bike. Six years is long enough. Plus, I wanted to make sure I was totally vested in the Trek brand to help promote it along with the Women Who Ride program.
So I'm so not a techno-nerd, but I am all about the aesthetic. This was a custom paint and I picked black for two reasons: the main one being I wanted a classic look that I wouldn't grow tired of. Today's flames are tomorrow's polyester suits so I went with minimalism. The second reason is the very first road bike I bought
myself was a Schwinn and it was black. I bought it with money I earned delivering newspapers. That thing hauled newspapers like a pack animal.
Probably all steel.
And what about them sexy wheels! I originally didn't want silver but that's all they had at this level, and now I'm glad I did it. I love how the silver brings out the silver accents elsewhere.
Miago!
Posted by Roxy at 10:57 PM