Let Love Drive: A Road Trip with My Dad (Texas to Kansas)

Itinerary: Fly to Dallas; Drive from Flower Mound TX to Scott City KS
Miles: 531 (driving)
I flew into Dallas Fort Worth on a Monday afternoon by way of Tampa. The flight was full but the airports were not. It was easy to social distance until it was time to fly. I was in an aisle seat all the way in the back. One benefit of this virus, face masks helped stop the blain chatter amongst strangers sitting next to each other on a plane and cover mouths that lay open when sleeping. Within a few minutes of landing, I was in an Uber driving towards the Dallas suburb Flower Mound, Texas. My brother who had driven down from Nebraska had already left on an early flight and extended Dad's hotel stay and when I arrived to meet him, he was sitting in the back of his new-to-him Buick Elantra. I tried to wave as I went by but he didn't see me. The driver dropped me at the front and I walked over to him. He was surprised that he didn't see me drive up but I explained I wasn't in a taxi. What do you mean you weren't in a taxi? Never mind. 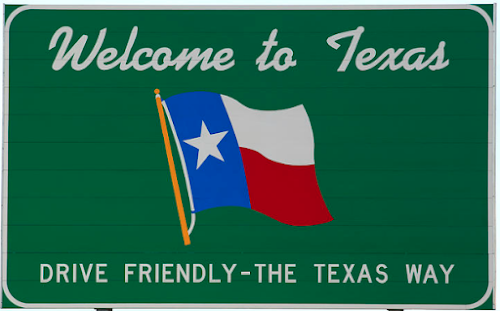 I plugged his sister, Barbara's, address into Google Maps and we were off. Of course I didn't exit the parking lot as he would have. Obeying "Molly", the name we dubbed the voice of Google Maps, I took a right instead of a left at a stop light as he directed me to and I exclaimed, "See Dad, aren't you glad I'm on this trip with you? You would've ended up going the wrong way". Dad has a terrible memory and though he recognizes the fact and often shames himself for it, he equally forgets this fact and continues on with life as normal, thus the cycle starts anew. I know this because I'm the same way. I may not be as bad as he is now, but I see what is coming to me and I don't like it. But like Dad, I can recall songs and details from my not so recent past with ease. Just don't ask us what we had for breakfast.
We arrived at his sister's place in a tight trailer community sandwiched between suburban sprawl and rural farmsteads. Barb is in her 80s and still works five days a week in security for Amazon. She's been in the industry for a while. She likes to work. Her kids are grown and away and so that's what she does. Work and go home. We arrive on the first of two days she has off. It was over 100 degrees in the shade. We knocked on the door and were greeted by Barb and her very excited dogs who look like a cross between a dachshund and a chihuahua. We spent the entirety of day talking and catching up. She made us dinner of microwave lasagna. After dinner we walked the dogs. It was hotter than a witch's cauldron so we didn't go very far. After, we watched the news, talking about current events. As kids of the Depression, I was curious about their opinions and they were, for the most part, what I expected of eighty-somethings. And now with masks, it was hard for Barb to do her job properly and some parts of the job went away but she was thankful to be working. Outside of work she didn't ever wear a mask. Dad's opinions were really a reflection of what the seed hats thought back home at the local co-op but I am truly relieved that he was taking the health risk somewhat seriously and would wear a mask and wash hands. Dad has outlived many people in his circle. It's a medical miracle, considering all he's done to his body. He will outlive this as well.

The next day, I was feeling quite antsy. I made a plan to get outside despite the heat. There was a large lake nearby and to my joy, mountain bike trails. So I put on my hiking shoes, grabbed a water bottle and drove to the trails. For a week day morning, the lot was busy. I hiked to the lake and found a nice spot on the water's edge to read. The wind was howling and there were white caps on the water. After a bit of rest, I took back to the trail and on the way, I came upon a doe that was staring at me in the middle of the trail, not knowing what to do. Hello, I said. And with that, it bounded into the grass where is sat motionless, hoping I'd just go away. But I was able to snap a photo of Bambi before it disappeared for good.

After the hike, I found a local coffee shop to cool off and I plopped myself down with my book and a large iced coffee. It was late morning. I called Dad to let him know where I was and that I'd be back for lunch. When I got back, he wanted to go somewhere also, so I took him to the lake to see the white-caps. Then we ran to Walmart to get some cooler shirts for him and then found a sandwich shop for lunch. Dad is always amazed at how much food costs. It's just deli meat and bread, he'd bark. Yeah, but someone has to pay for the labor.

After lunch, we continued with stories of their upbringing and Barb got out some photo albums. The images were gold. They as children and then as teen agers and young adults. Stories of Barb being the one who got the art and music talent. She's an accomplished painter (but doesn't paint anymore) and could play the stand up base and other instruments. She traveled and went to college in Indiana where she mingled with people of color and lived fully. Dad ended up going into the marines and to his joy was able to see the world. I've seen many of the photos he took on those travels. Seeing him as a young man is so fun. I see physical traits of my brothers in those pictures.
But the real treat was to see for the first time a picture of their birth mother, Cora Belle and her sister Florence. The Abbott nose (or I should say the Evan's nose) was the first thing I noticed. That's where it comes from! (Our noses are turned up on the ends and bulge out on the sides). I have the same nose as does my youngest brother and so does his daughter.
Along with the pictures came the stories of their tough childhoods growing up in poverty during the Depression in South Sioux City, NE. But neither Dad nor his sister dwelled on the negative. They pointed them out, but it wasn't woh-as-me. It was just a matter of fact. Grandma Cora died young of pulmonary disease. Dad said she was pretty bad at the end, always on crutches or in a wheel chair. He was also sickly and was taken care of by his aunt after his mom died. I've never heard Dad talk so much about his parents. Clearly it was not a picture perfect home life and I'm sure many things were pushed deep down and until now long forgotten.

This next photo of Dad and his siblings was such a treat. Never in my memory do I recall Dad wearing shorts. In fact he boasts of the fact ever since he got a terrible sun burn in the military. Well, this was evidence that his legs had once seen the sun. I sent the photo to both my brothers immediately after I saw it.
Dad didn't mention anything more after we left the next morning. Not one to dwell, especially if it was a painful or unhappy experience, the past is past, he'd exclaim. I was glad to hear more about how he grew up and how he lived with his siblings. I was starting to see him in a new way and it was fun to imagine him as he was long before we came along, when fishing, singing and dancing were common pass times, if not ways to escape reality.

Our next stop was Scotty City, Kansas, to visit Barb's daughter, Peggy. I met here once at uncle Wayne's funeral (Dad's brother) but I don't remember (Abbott memory lapse). Before arriving, I made a plan to stop in Dodge City since Dad is such a huge Old West fan. The town boasts of Old West attractions like the Gun Fighters Wax Museum and recreating old west frontier town of Wyatt Earp's day, when shoot outs at sun down were common place. But our romantic idea of the town quickly gave way to a rough, cow town on the edge of know where. Yeah, there was an old street but it was in the back yard of a museum and the wax museum was closed due to Covid. Dad can't walk far so we did a quick walk down a boardwalk before realizing none of the stores were even open. So after a lack luster lunch and a quick drive around town to say we'd been there, we headed out to Scott City and to meet cousins, second cousins and even a new third cousin.
We stopped at our motel before going to the house to freshen up. The only way this trip was going to work was if we got separate rooms. Dad snores and if I was going to drive, I had to be able to sleep. He also likes it hot in the room and I like it cold. He likes TV and I don't. So to keep things cheap, I'd find these mom and pop motels that were like $50-60 per night. It was also easier for dad because we could pull right up to the room and he wouldn't have to walk very far. Our routine became the same. After I'd get us in the room, I'd call his room using the land line and ask him of he could get the remote to work. 99% of the time, I would have to go to his room to help him figure it out (only to find out the next day he'd hit the wrong button and then not get back to whatever he was trying to watch and end up reading).

We arrived at our family's house on a quaint street in this small midwestern town. It was a bungalow not much different than the one we moved out of in Omaha, with old wood floors and high ceilings. There Peggy greeted us along with her daughter Samantha and her 2 year old granddaughter Autumn, who put everything in her mouth from dirt to rocks to to leaves. When her husband got home from work, we were treated to an amazing grilled meal of brats and burgers with the most delicious steak fries and home-made pickle relish. To die for! We sampled her pecan bourbon (damn good) as we hung out in the back yard. Later we ended up on the front porch where we watched Autumn play and wave hello to neighbors. We shared a few stories and pictures of the kids. Dad had lived with her in Montana when she lived there with Barb. Dad was Peggy's favorite uncle and knew his idiosyncrasies. I could tell by how she would rib him with jokes and they would laugh. It was sweet to see him having these interactions. He loves children so the baby was just icing on the memorable cake. Before it got too late, we took some photos on the porch and said our good byes.
The mountains were calling. 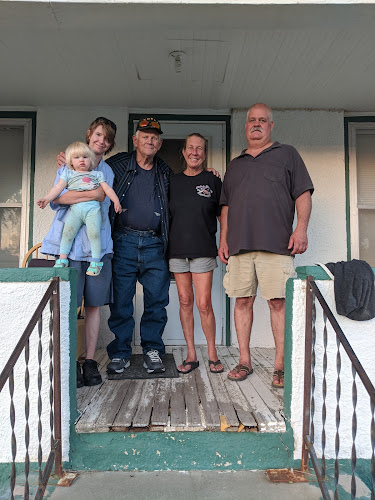