In June, despite pandemic and civil unrest, my 85 year old dad and I went on a 5000 mile drive through the mountain west, in his Buick, to see his sisters in Texas and Montana.

The morning we left Butte, the skies were dumping rain. It was the first day of bad weather so far. Bummed that we weren't able to see the Berkeley Pit (see previous post) we refilled our coffee thermoses at the hotel and headed towards Corvallis to see Dad's other sister, Charlotte, who lived alone with two cats and a dog in a trailer court. She offered Dad the guest room if he wanted and I could share her bed with her cats. How old am I, ten?

The drive through the hill country was great despite the rain. At least we could get some radio stations and when the hit "Maybelline" came on, of course, we belted out the chorus because everyone knows that's what you should do. And it was then that the idea struck me. Maybelline would be the name of Dad's Buick but not just Maybelline—Able Maybel would be her moniker from that day forward. "Yeah, I like that", Dad said, and repeated the name.

Prior to arriving, Dad seemed hesitant about visiting Charlotte. Dad's prone to argue with her more than his other sister and their phone calls, many times, end with one hanging up on the other. More than once she has called me when she couldn't get ahold of Dad. He'd eventually call her. "She just wanted someone to complain to," he'd say.

So, we took the long way, up through Missoula where we stopped for more coffee at a local shop and then south on a two-lane highway, minding speed limits as we passed through small town after small town. The Bitter Root valley was stunning. Mountains to the west and the Bitter Root River to the east. Large expanses of ranch land filled the voids between the mini metropolises. Despite it being a week day, the morning rush was in no hurry what so ever. I followed respectfully behind a new Chevy being driven by an old cowboy. This city girl had gone country.

We pulled into the trailer court. It was much larger and more spread out than where Barbara lives and it felt more like a neighborhood with trees and flowers. Such is the difference between living on the edge of suburbia and the edge of wilderness. Her trailer was double wide with a nice large covered porch. Not too soon after we arrived, she gave us the dime tour which included her yard and all the aches and pains of trying to keep plants and flowers alive. 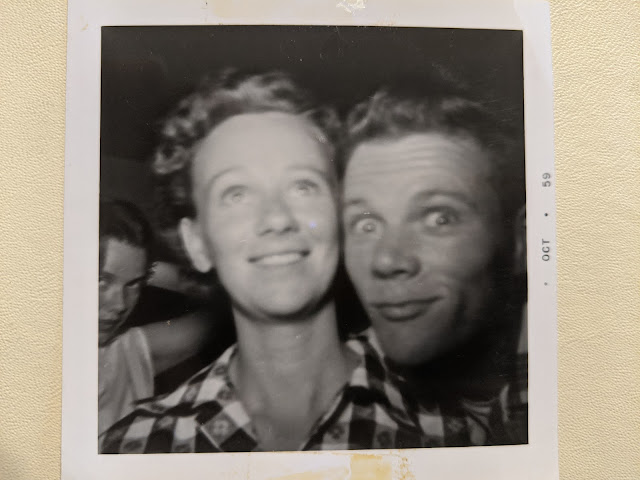 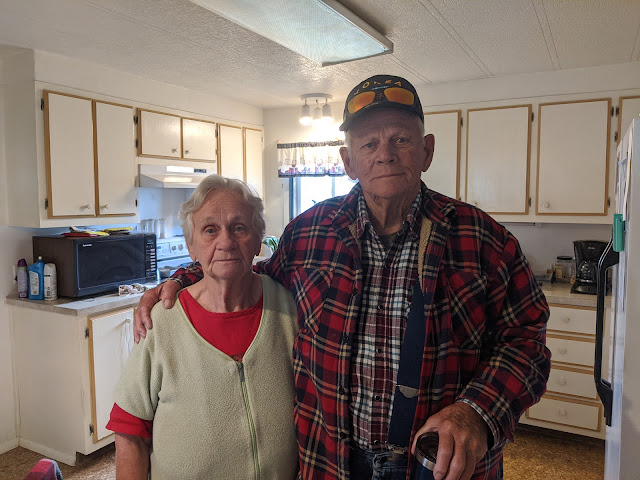 We spent all day, like we did with Barbara, chatting, or rather as Dad always says about their phone calls, listening. "I can't get a word in edgewise" he would gripe. That was indeed the case that day which was good because I didn't know any of the old stories and Charlotte was the keeper of the family history. She has one of those memories, unlike Dad and myself, where she can recall dates and names of family members current and deceased. She talked much of their mom but less of her dad, who is not the same as Dad's father. "I'm a bastard!" she exclaimed standing in her kitchen, wild eyed. "I'm not ashamed of it". And without missing a beat, Dad says, "I think it was the mail man." No wonder she hangs up on him! 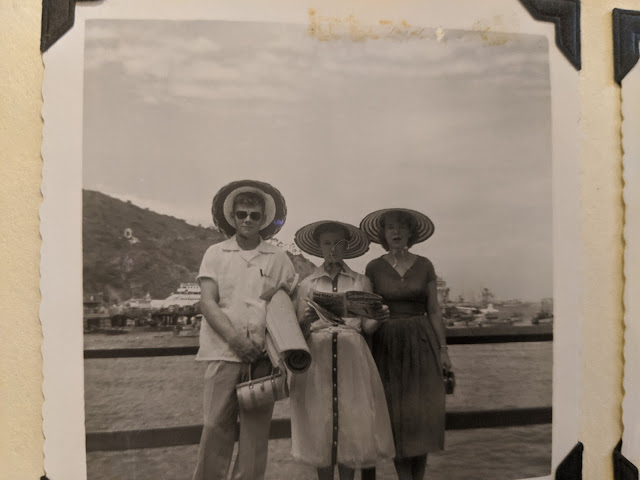 Over the loud background of the TV (she was addicted to watching Northwoods Law on Animal Planet) her stories bled from one to the next, unless she stopped to pay attention to something interesting on Northwoods Law like finally figuring out who was poaching local deer.
"You know what I call those people?" Charlotte asked over the TV.
"No, what?" I asked, waiting from some kind of slur.
"Rebel rousers! People that cause a ruckus, that's what I call 'em!" I laughed to myself. I don't know that I've actually heard anyone say that word out loud.
Dad chimed in a few times to add to her story but mostly he sat in the recliner, lip reading the TV. When they did share a story, it went back decades to a simpler, obviously much more difficult time. But despite those times, they also seemed to have found joys. He spoke of having to steal whatever he could get to eat or sell to get money to eat. One daunting story was when his aunt fetched him from the doctor for some kind of illness and she had to carry him. They walked by a market that had a sign reading mule meat 10¢ lb. She told my dad that he had to walk because she couldn't pass up the sale and couldn't carry both him and the meat. Dad told another a story about how his mom gave him enough money to see a movie but he had to pick between seeing a silent black and white film and have enough money left over for popcorn (which he still loves today, as do I) or see a color film but no snacks. He said he chose color because it was Pinocchio and he stayed in the theater all day watching it over and over 'til they kicked him out. Since Charlotte was younger, either she wasn't born yet or was too young to recall these stories. She shared stories of her high school sweetheart whom she eventually married ("But to the disapproval of his mother. I wasn't good enough.") From the photos she showed me, he was quite the looker and it seemed to me, despite her disdain for him at the present time (they separated long ago), she secretly longed for those days again of living a good life in California and eventually Montana. She had me get one of her albums off a high shelf that had pictures of her kids, which I had never met and whom Dad hadn't seen in over 30 years. She had no filter, telling me who she liked of her kids and who she didn't and why. And she seemed rather proud of that detail of her character, reminding me that you'll always get the truth, good or bad, from her. She told us we should go see her favorite son, Ray, in Cody when we stop there.

As the day wore on, Dad was blinking incessantly, enough to cause Aunt Charlotte to ask why he was blinking so much. Dad said because they were watering and itching. She admitted to using a strong cleaning solution because she hated her home to smell of animals (which it didn't). Either he was allergic to the pets or the cleansing residue. Either way, that gave us the reason to get a hotel instead of staying the night. After a simple meal she made, we said good night and left to check into our hotel. The evening was young so we went for a drive, just to see what there was to see. We found access to the Bitter Root River and like I did back in Salida, I put my hand in the water and then grabbed Dad's, not only to share the shock of how cold it was, but also to say I'm glad I'm here with you, by a river in the mountains. 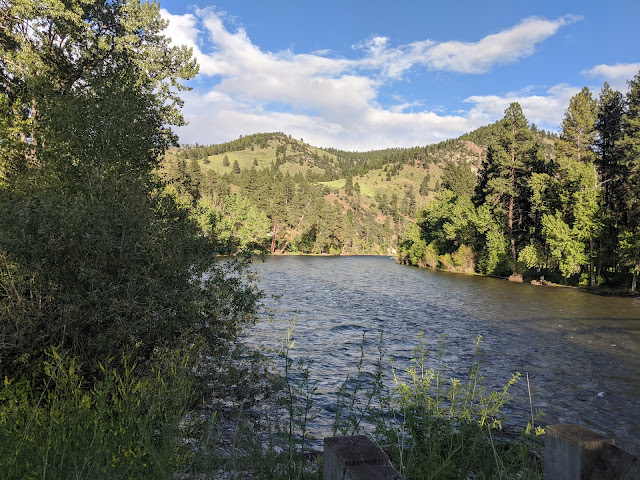 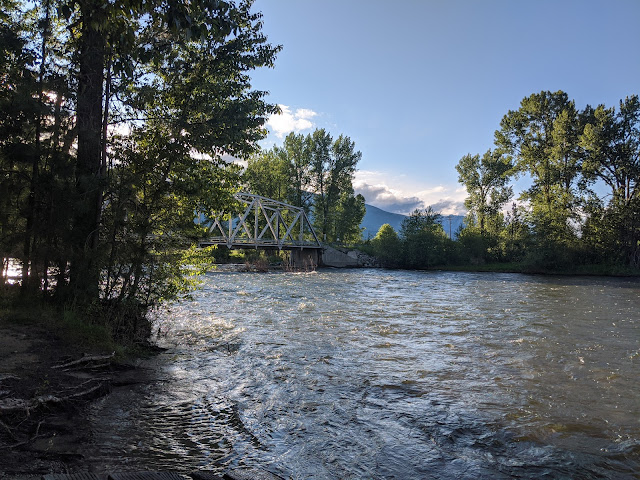 It's interesting to go through the exercise of thinking about your parents as young people, long before the weight of parenthood and adulthood have taken their toll. I love this photo of my dad with his nephew, Guy. I can see my brothers in his face. His ears haven't changed one bit ("There are two body parts that never stop growing, your nose and your ears", he and Charlotte would say). 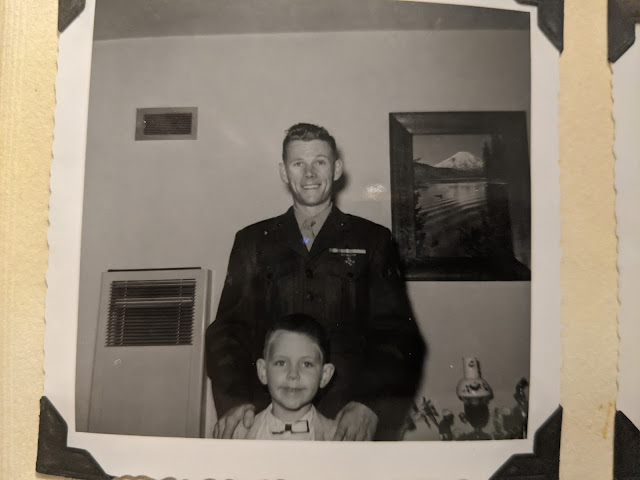 The day's conversations shifted my perspective of my dad. For so long I've heard the same problems and struggles with his health and what-not, that I forget he was wild eyed and bushy tailed, like in the photo. I like to imagine the younger James Abbott as being similar to the character, Jack, in the movie Titanic: always hustling, street smart, kind, lean of judgement, and ready for adventure.

As we drove back to the hotel, I felt bad that after all the traveling I've done over the last twenty years, it took this long for us to travel together. But I'm sure glad we finally did. Can't change the past so let's be getting on with it, he would have most likely said, had I mentioned this thought.

And so we did, capping the night with more cribbage games and beers.
Posted by Roxy at 3:48 PM