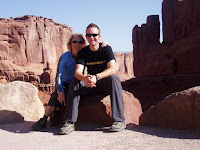 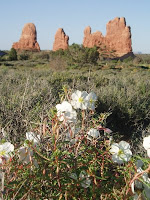 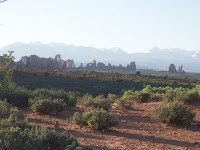 Nebraska weather blows. Literally. For days. I have no idea where our trash can is. These chilly, windy days only make me think more about our annual trek west to the red dirt mecca of Moab and it's drinking buddy, Fruita. Never been, you say? Then you are truley missing out on a bike experience of a different kind. My first trip to Moab (which I had never even heard of prior to) was with a group of riders lead by well known huckster, Trevin Seng. That's where I met Nerd Boy for the first time. What a ball of energy. He was like a puppy with a new chew toy. Like every second. But now I know why. When you get there, and realize all of the riding you're about to do, you'll pant too. When I got there and layed eyes on the rusty-red horizons, and the sky that never ended, I thought how lucky I was. The scenic route into Moab is spectacular. The two-lane highway snakes through an expanse of land that's as wild as it is desolate. Get out of the car. Turn it off. You will hear nothing but your own heartbeat as you try to take in an what you're seeing. As you get closer to town, the Green River appears and runs along the highway as it erodes the massive canyon walls as it's done forever. In the distance the arches and formations of millions of years of wind and rain seem to be frozen in time. All of this makes the wanderer in me ache. I want to see all of it but it's gigantic and impossible so I burn it into my brain and live the experience of seeing it all for the first time with each new person we bring out there. It just simply has to be seen to be believed. (Check out the slide show from last year's trip). 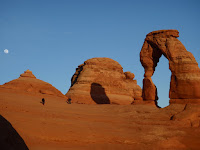 We'll hit the bigs: Soviergn, Baby Steps, Klondike and the big mamma, Porcupine Rim. Each has something different to offer. We usually try to take newbies to do some sight-seeing as well, making the pilgramage to Delicate Arch for a sunset saluation. Ever seen a water color in real time? God's a great painter! We'll eat well, drink even better and sleep deeply from all the days' riding. I can't wait! 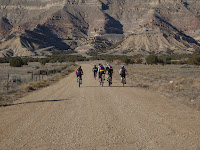 A few days in Moab first and then we'll head back east to Fruita, Colorado. Peeps, if Moab is the mecca, then Fruita is the lost holy land. There is so much riding there but because the town is super small and there's nothing really else to do, it really has stayed pretty low key and chill. Don't get me wrong. It's world reknown, but it's still a cowboy town who puts up with all us dirt heads from the big cities. But they are super nice folks and we have a great time.
Our buddy Mike Resetar (THOR fame) leads a trip every year and we discovered this place on one of his trips. It has more true single track riding. There's more vegitation and more change of scenery. There's just plain more riding. Everywhere. Road 18 is like an amusement park for mtb'rs. Trails upon trails that aren't to long intersect with each other. You can do quick runs all day. But bring a tarp. There ain't an ounce of shade. Road 18 is at the base of the Book Cliffs, a long row of canyon cliffs that's rideable more in the summer due to altitude. I've never been but I'm sure it'd be a good time. But of all the areas I've ridden, Rabbit Valley is my go-to fave. You get all of the good stuff and some bad; deep sandy roads and some power climbs but they are few. What you do get is slightly technical single track that snakes in and out of the canyon's fingers. The view of the Colorado River is right out of an old western movie, wide and free. For the most part we're always above it so it's a great back drop for photos. And to make things extra fun, this year I'm going to race it at the first race of the Mountain State Cups race. A national. Holy crap. My first! But I figured, why not? I'm there and I've ridden the area enough to know what I'm in for, so I'm going for it. RF is too. I'm psyched.
There's so much riding in Fruita and Grand Junction. I encourage everyone to get out there and disappear into the wild.
So come aboard. If you're interested, let me know.
Posted by Roxy at 11:47 PM
Labels: fruita, moab